SINGAPORE - Completing a three to four-year university degree will no longer mark the end of studying, as training and upgrading of skills becomes more important in a rapidly evolving economy.

Going forward, the universities and other higher learning institutes will play an even greater role in adult education, providing greater support for their alumni, said Mr Ong Ye Kung, Minister for Education (Higher Education and Skills) during the debate on his ministry's budget on Monday (March 5).

For a start, the National University of Singapore (NUS) will draw up plans for each student's career and learning path, for up to 20 years from the time they are admitted, he announced.

The programme, called NUS Lifelong Learners or L³ for short, will make all of the university's 288,600 alumni eligible for publicly available continuing education and training (CET) courses. They may also take selected courses, which could culminate in qualifications such as graduate diplomas, or even bachelor's or master's degrees.

The first suite of 500 courses will start in August, and more will be offered in phases. NUS will offer virtual vouchers to alumni to offset the cost of one of its CET courses of their choosing.

According to the university, all of its 288,600 alumni will be automatically eligible for publicly available CET courses under the new scheme. They may also stack up selected courses into qualifications such as Graduate Diplomas, or even Bachelor's or Master's Degrees, it added. NUS provost Ho Teck Hua, calling the initiative a bold one, and the first of its kind in Singapore, said: "At NUS, we see lifelong learning as the key to ensuring that our students and alumni stay updated on the developments and disruptions that globalisation and digital technologies are bringing to the workplace.... It represents our strong commitment to our students and alumni, as well as our ambition to be their anchor for lifelong learning."

The new programme builds on an initiative in which all NUS alumni can take up to two modules for free over a three-year period. 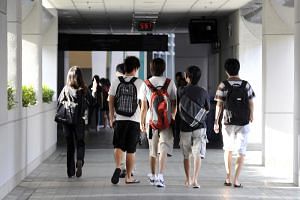 Response to the initiative, which started last year (2017), was overwhelming, said Mr Ong. NUS received more than 8,000 applications for the first batch of 404 places in 79 courses.

"NUS will treat every student enrolment as lasting for 20 years, and not just three or four years. It will help their students build their careers and learn for life through this period. This gives new meaning to the word alumni," said Mr Ong.

He added that this change in mindset will spread to all institutes of higher learning, which will eventually have a comprehensive catalogue of courses for adult learners.

Instead of just extracting short courses from full-time programmes, in future, the modular courses will have to be developed independently, said Mr Ong. These courses need to be delivered by industry practitioners with relevant skills, or cover cutting-edge technology that could disrupt industries, he added.

He said that MOE expects to channel $100 million more by 2020 into the CET courses run by institutes of higher learning, up from about $210 million currently.

In reply to several MPs, including Ms Foo Mee Har (West Coast GRC) and Dr Intan Azura Mokhtar (Ang Mo Kio GRC), who had asked about the progress of SkillsFuture initiatives, he said that 800 bite-sized modular courses have been launched since October last year as part of the SkillsFuture Series.

As of February, more than 4,900 adult learners have enrolled in these courses, which cover disciplines such as engineering and finance as well as new technologies like artifical intelligence, he said.