SINGAPORE - The Government has a three-pronged strategy to deter wildlife trafficking at Singapore's border checkpoints.

This includes subjecting passengers and shipments to a risk assessment, conducting multiple layers of checks at the checkpoints, and adopting a coordinated enforcement approach among the agencies involved, such as the Agri-Food and Veterinary Authority (AVA), Singapore Customs, as well as Immigration and Checkpoints Authority.

"Taken together, these measures have led to several successful seizures of illegal wildlife in Singapore," said Senior Minister of State for National Development Koh Poh Koon in Parliament on Wednesday (Feb 28).

Dr Koh was responding to a question raised by Mr Louis Ng (Nee Soon GRC) on what measures are in place at Singapore's border checkpoints to deter wildlife trafficking.

On the importance of risk assessment, Dr Koh said that the framework helps flag passengers and shipments that require more detailed checks. Passengers and cargo are also screened by officers and a variety of other tools, such as X-ray machines.

Singapore's agencies also work together to take quick action "after receiving credible and actionable intelligence or tip-offs from the public and from our international partners", Dr Koh said.

He warned that traffickers are subject to heavy penalties if caught with wildlife parts, facing fines of up to $500,000, up to two years' jail, or both. 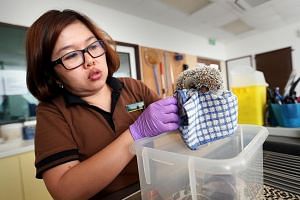 Even though demand for illegal wildlife parts, such as rhino horn, ivory or pangolin scales, is not as high in Singapore compared to other countries in the region, the Republic has long been flagged by international environmental organisations as being a transit point for these items.

Mr Ng also asked if Singapore will consider deploying sniffer dogs to detect wildlife on passengers or in cargo, as the country does for narcotics.

"More studies are needed to determine if sniffer dogs can be more effective than our current methods," Dr Koh said.

But he added that the AVA - which falls under the purview of his ministry - is continually studying the efficacy of different tools and techniques to detect illegal wildlife at the border checkpoints.