Mr Ong Teng Koon (Sembawang GRC) and Ms Cheng Li Hui (Tampines GRC) had asked what projects are in the pipeline for the Smart Nation Programme Office, during the debate on the budget of the Prime Minister's Office.

A new e-payment scheme will soon be launched to allow the customers of any bank to send money to anyone via their mobile number, said Dr Balakrishnan, who is also Foreign Affairs Minister.

Under the soon-to-be-launched Central Addressing Scheme, the sender need not know the recipient's account number as the scheme will map mobile numbers to bank account numbers for funds to be credited.

This means users need not go through the hassle of asking for and entering recipients' bank account numbers to add a payee. 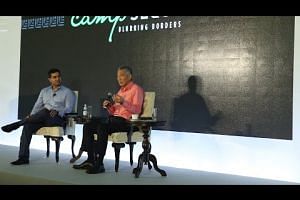 Singapore can do much more when it comes to adopting new technology: PM Lee

Dr Balakrishnan said this scheme is one way to advance e-payments in Singapore.

It is also essential to have a new integrated digital identity system, to allow more smart nation transactions to go online, he said.

"SingPass, to be honest, is not good enough," he said, adding that the new digital identity system must have biometric and encryption capabilities, as well as be open to use by the private sector.

The Singapore Government started on this project in March last year (2016) when it called for a tender for a Mobile Digital ID.

The Mobile Digital ID - likely to sit in a phone's SIM card - will uniquely identify every Internet user, just like the NRIC does, and can be used to authenticate all kinds of online transactions with the Government or commercial entities such as banks or telcos.

Individuals' credentials are encrypted and stored in a tamper-proof zone of a mobile phone. Hackers would not be able to make sense of the encrypted data even of the phone is lost or infected with malware.

This method is safer and more convenient than most authentication methods in use today, such as SingPass.

It is modelled after GovTech's Beeline app launched in August 2015, which provides a platform for office-goers to suggest routes and book rides from private bus operators.

GrabShuttle offers 15 routes today with fares ranging from $3.50 to $5.00 per trip. More routes will be added in the coming months.

Dr Balakrishnan said such collaboration can create a whole new level of service that the Government cannot achieve alone, and solves the "last mile" commuting issues in Singapore.