SINGAPORE - Recalcitrant motorists who drive under the influence of alcohol or drugs could face a lifetime ban from driving and also double the jail time, under proposed changes to the Road Traffic Act that would also stiffen penalties for dangerous and careless driving offences.

For instance, minimum mandatory sentences for dangerous driving causing death and grievous hurt, as well as additional penalties for offenders who did so while under the influence of alcohol and drugs, were also among changes proposed in Parliament on Monday (May 6).

Under the Road Traffic (Amendment) Bill, road users who drive under the influence of drugs or alcohol will face double the penalties that are currently stipulated in law.

Currently, those convicted can face up to six months in jail or be fined between $1,000 and $5,000 for the first offence. For the second offence, they can be jailed for a maximum of one year and fined between $3,000 and $10,000. They will also face disqualification from driving for at least a year.

In the amendments proposed, first-time offenders will face up to a year in jail, or be fined $2,000 to $10,000, and be disqualified from driving for at least two years.

Their driving licences will also be immediately suspended, to prevent them from driving irresponsibly until the courts have decided on their case.

For the second offence, they will face up to two years in jail and be fined between $5,000 and $20,000, as well as face a ban from driving for at least five years.

Tough for victims to make claims in drink driving cases

For subsequent offences, they will be banned from driving for life - the first time that such a ban is specified for offences under the Road Traffic Act, if the changes come to pass.

Proposed changes to the Bill, which were first revealed in February during the launch of a road safety campaign, also include minimum mandatory sentences for the most egregious irresponsible driving offences.

These include offences in which the motorist drives dangerously or while under the influence of alcohol, resulting in death or grievous hurt.

If offenders were under the influence of drugs or alcohol, they will face add-on penalties of one to two more years in jail, and at least two more years of disqualification from driving for the first offence.

For example, currently if a person drives under disqualification, he will face three years in jail or be fined $10,000 for the first offence. Under the proposed changes, for his second offence, he will face double the penalties.

Offences under these two new classes will be further categorised into four tiers depending on the levels of harm caused, such as death, grievous hurt, hurt and where no hurt was caused.

In determining whether an act comes under dangerous or careless driving, the authorities will consider the manner of driving and whether it is inherently dangerous, whether the driver had engaged in risk-taking behaviour such as using mobile devices or had gone long periods without sleep, and whether the driver had the duty to take extra care in situations such as approaching a pedestrian or zebra crossing. 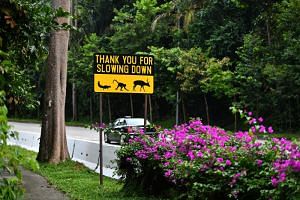 Motorists involved in accident with animals must stop vehicle, alert others in proposed changes to Road Traffic Act

According to public engagements conducted by government feedback and engagement agency Reach, the public is "largely supportive" of the proposed changes, said the Ministry of Home Affairs in a statement on Monday.

"Many of the respondents saw the changes as timely and necessary," the statement added.

The ministry also addressed concerns from some respondents on whether motorists would be held liable for the enhanced penalties even when the victim was at fault for causing the accident.

"During the engagements, MHA explained that the basis for higher penalties is that motorists, being in control of a vehicle that they know can potentially cause significant harm to other road users, ought to exercise greater care and responsibility," the statement said.

"MHA also provided assurance that, when assessing whether a motorist should be held liable for an accident, TP (Traffic Police) will consider whether the motorist had been driving safely."

"In addition, if the victim had engaged in risk-taking behaviour and violated traffic rules, TP will take the necessary enforcement action against him," it added.