SINGAPORE - Men can be considered victims of rape and peeping Toms, under a Bill introduced in Parliament on Monday (Feb 11) that will amend the Penal Code.

The proposed changes under the Criminal Law Reform Bill seek to expand the definitions of rape and sexual assault to make them more gender-neutral and accommodate more scenarios. There are also provisions to introduce new offences that specifically tackle the act of voyeurism.

It has been proposed that the definition of rape be expanded to include non-consensual penetration of the anus or the mouth using one's penis.

The current law defines rape as the penetration of a woman's vagina with a man's penis, without her consent.

This means that at present, only women can be victims of rape, and other forms of penetrative sexual activity are dealt with under sexual assault by penetration. The maximum punishments prescribed for both offences are jail terms of up to 20 years, with caning or a fine.

The Bill also seeks to expand the definition of sexual assault to include instances where a woman forces a man to penetrate her vagina, anus or mouth with his penis.

The current law tackles only the situation where a woman forces a man to penetrate her with other body parts, excluding his penis. 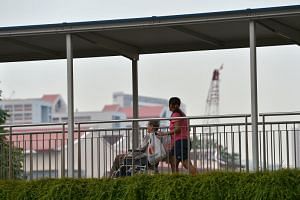 The proposed amendments will protect men against sexual assault by women.

The Bill will also criminalise voyeuristic acts and crack down on peeping Toms and those who take part in the supply chain of "upskirt" videos and photos.

The proposed offences will include observing or recording someone in circumstances where the person could reasonably expect privacy. It will also be a crime to produce, possess or distribute voyeuristic recordings.

The maximum sentence for voyeuristic acts could range from two to five years' imprisonment, including possible caning or a fine.

Another new proposed offence targets the act of flashing and will be parked under the specific offence of sexual exposure, where the offender exposes himself to gain sexual gratification, or causes distress or alarm to observers.

The new category will also deal with the emerging crime of "cyber-flashing", where images of genitalia are sent to recipients without their consent.

Offenders found guilty of sexual exposure could face up to two years' jail, with the possibility of a fine or caning.

The Bill also introduces a new section to clarify the types of "misconceptions of fact" that could negate consent in the context of sexual offences.

Instances that could negate consent would relate to the nature of the act, the purpose of the act, and the identity of the person doing the act.

For example, if a woman had given consent to sex under the misconception that it would extract an evil spirit from her body, or that it would heal a chronic disease, such instances could negate consent. Also, if a woman had agreed to have sex with another individual, wrongly believing, for example, that the person was her husband, such consent could be negated.

Stealthing, a relatively new term where one covertly removes a condom when consent had been given by the other partner for only condom-protected sex, will also be dealt with.

A new provision under the Bill will criminalise situations where sexual activity is obtained by deception or false representation. This includes deception regarding the use of a sexually protective device or whether one is suffering from a sexually transmitted disease.

"In such cases, while consent is not legally negated... the consent obtained is compromised, and there is risk of physical harm to the victim," said the Ministry of Home Affairs (MHA) in a release.

Additionally, the Bill seeks to repeal marital immunity for rape.

Addressing concerns that the repealing of marital immunity for rape would lead to the rise of false rape allegations by vindictive wives, the MHA said that all cases of alleged rape are treated with the same level of "evidential rigour" during investigation and prosecution. There are also measures in place that address and deter false reporting.

"The Government agrees that persons who attempt suicide should be provided with help, rather than regarded as criminals," said the MHA.

In addition, the Police Force Act and the Mental Health (Care and Treatment) Act will be amended to provide the authorities with the powers to intervene and prevent loss of life or injury in cases of attempted suicide, said the ministry.