SINGAPORE - At the end of a state visit to Istanbul in 2009, then President S R Nathan called for a meeting and asked why some representatives from the statutory boards and companies had left the trip early.

He rebuked those who did not stay for the networking sessions: "You may think the socials are unimportant but they are important. Staying back, discussing and engaging with your host is how we make Singapore relevant. I have come here to do that."

Mr Christopher de Souza (Holland-Bukit Timah GRC), who was part of that delegation, recounted this anecdote to illustrate how the late Mr Nathan - like pioneers Lee Kuan Yew, Goh Keng Swee and Hon Sui Sen - led by example and gave the nation his all.

"The point he was making was this: On national duties, you better give it your best. Nothing less is sufficient. That is what standard bearers do - they maintain standards for a cause. Mr Nathan's cause was Singapore," he said.

Mr de Souza was among nine MPs who paid tribute to the late Mr Nathan on Tuesday (Sept 13), after which the House observed a minute of silence.

Mr Nathan's wife, Urmila, children Juthika and Osith, and grandson Kiron were present for the tributes.

The Republic's sixth and longest-serving president died on Aug 22, aged 92.

Speaker of the House Halimah Yacob opened the sitting with her tribute, charting Mr Nathan's career path from a humble social worker to the highest office in the land.

She recounted how Mr Nathan had sent her a handwritten note after she became Speaker in 2013, in which he wrote of his and his wife's joy at her appointment, and his prayer that "God will be with you as you undertake your new responsibilities".

Said Madam Halimah: "Such was the measure of the man. He had walked among kings and presidents but he remained fully rooted to the ground, never losing his bearings and keeping his humanity to the end."

Her voice wavering, she added: "The House records with deep regret the passing of one of our esteemed sons of Singapore, Mr S R Nathan."

MPs shared a variety of anecdotes about Mr Nathan, with a common thread of how he had touched numerous groups that he encountered.

Leader of the House Grace Fu highlighted the close relationships Mr Nathan had with the Chinese community, recalling his attendance at numerous cultural festivals as well as his talent in calligraphy.

Nominated MP Chia Yong Yong talked about how he helped numerous Singaporeans, whether as a social worker, a volunteer hostage during the Laju incident, or the man who started the President's Challenge. 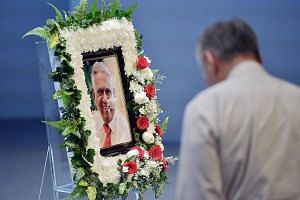 A great son of Singapore, Nathan had deep, abiding sense of duty

Unionist Desmond Choo highlighted the impact he left on the labour movement, including how he had pushed for the modernisation of the labour force.

Mr Pritam Singh (Aljunied GRC) shared how he ended up sitting with the former president at a Lions XII football game in 2013.

At one point when the Lions XII nearly conceded a goal, Mr Nathan pointed out to Mr Singh the Lions XII player who lost possession earlier, thus allowing the opponents to create a chance to score.

Said Mr Singh: "In a very different context and rather unanticipated way, I bore witness to his eye for detail and his ability to focus on the issues that mattered, traits for which he was widely known in public service."

But the most unforgettable incident of the night came when Mr Nathan told Mr Singh to always look after the interests of Singapore and Singaporeans.

"At no point did he raise any doubts or concerns about serving Singapore in a different colour, cause or capacity," he said.

"It was clear what motivated him all his life. President Nathan's simple words and the lyrics of his favourite Tamil song, Taking Sand from Tanjore, which was played at his State Funeral, remind us that regardless of our differences, we are one people and must remain so."