SINGAPORE - While MPs have suggested changes to the CareShield Life insurance scheme to provide more benefits, there is a need to keep premiums affordable.

The point was made in Parliament on Tuesday (July 10) by Mr Chee Hong Tat, Senior Minister of State for Trade and Industry, and Education, who is also handling CareShield Life.

Several MPs, for instance, suggested relaxing CareShield Life's payout criteria of not being able to perform three activities of daily living (ADLs) to two instead. Others proposed that the payout be increased over time.

But Mr Chee said to keep premiums affordable, the payout amount will stay fixed for people once they start claiming, and not increase throughout their life.

"If we raise the payout amount from $600 to $800 per month, premiums for a 30-year-old male in 2020 could increase by about one-third," Mr Chee said during the debate on CareShield Life on Tuesday.

Further lowering the claims criteria from three to two ADLs will increase premiums by another one-third, he added. This will make the annual starting premium about 70 per cent higher than the current proposed premium of $206.

Mr Chee said if the payout amount is allowed to continue increasing for life after a claim is made, premiums may have to increase further by another one-third. 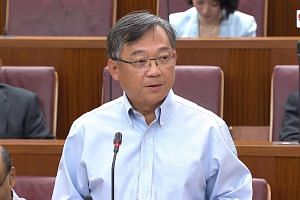 Switch to CareShield Life? Yes for some

He noted that MPs Lily Neo (Jalan Besar GRC), Zainal Sapari (Pasir Ris-Punggol GRC) and Joan Pereira (Tanjong Pagar GRC) had asked if premium discounts could be given to ElderShield or CareShield Life policyholders who do not make claims, to incentivise healthy living.

But this was not feasible, he said.

As the two schemes are pre-funded - meaning policyholders pay premiums when they are young and receive coverage for life - one can only confirm that a person is not claiming from the scheme after he or she has died, said Mr Chee.

"In computing the premiums, the actuaries have included the probability that some policyholders will not claim from the scheme because they do not become severely disabled. In other words, this has already been incorporated in the premium quantum," he added.

Nominated MP Chia Yong Yong, as well as Mr Zainal, Mr Ang Wei Neng (Jurong GRC) and Ms Tin Pei Ling (MacPherson), had also asked for clarifications on why $3.3 billion in premiums for ElderShield were collected, but only $133 million were paid out as claims.

Mr Chee said it is logical and necessary for the scheme to show a positive balance when policyholders are younger and less likely to be severely disabled.

"However, as policyholders grow older and more of them become severely disabled, the balance amount will be gradually used up to pay for their claims. The balance amount is not profit, it is to meet future liabilities," he added.

The good news is that Singaporeans who wish to have more benefits, such as coverage for less severe disability or higher payouts, and are willing to pay higher premiums, will be able to purchase additional coverage from private insurers.

The Health Ministry will work with private insurers to adapt the design of their supplements to complement CareShield Life, and continue to allow policyholders to use Medisave to pay for these supplements, he said.

The ministry will also provide a premium calculator by the end of the year for existing cohorts to find out more details about their premiums.