SINGAPORE - A quarter of all households in Singapore own bicycles, with 125,000 people using them for their daily commutes, said Senior Minister of State for Transport Lam Pin Min in Parliament on Thursday (March 1).

Dr Lam was replying to Dr Lim Wee Kiak (Sembawang GRC), who had asked for statistics on bicycle ownership and usage.

Dr Lim had also asked if Singapore was on track to achieve its Walk Cycle Ride SG vision, which aims to have 75 per cent of peak hour trips in the Republic made using public transport by 2030.

In response, Dr Lam said the percentage of peak hour trips on public transport increased from 64 per cent in 2013 to 67 per cent last year, and that the increasing use of personal mobility devices for first-and-last-mile trips was in line with this goal.

The elderly made up 42 per cent of those who needed help, followed by working adults (35 per cent) and foreign workers (19 per cent).

Mr Khaw was replying to Ms Sun Xueling (Pasir Ris-Punggol GRC), who had asked about the average daily number of requests for assistance with ticketing machines. 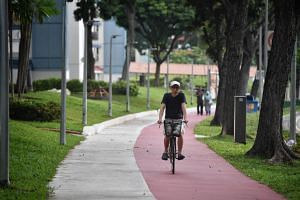 Her question comes after it was announced that all MRT stations will phase out cash top-up services at their passenger service centres by March 21, as part of the Government's move towards a fully cashless public transport system by 2020.

To ease the transition, public transport service agency TransitLink has a pool of 150 service agents tasked to help commuters use the ticketing machines.

"The service agents helped a few hundred commuters per day in the beginning (in September last year), but the number has since come down significantly," said Mr Khaw.

The service agents take a "flexible, patient" approach to requests for help, said Mr Khaw, when asked by Ms Sun what was being done when it comes to repeated requests for assistance from groups such as senior citizens.