Defence Minister Ng Eng Hen yesterday laid out in Parliament the fundamentals on which the national service (NS) policy is based to explain why the Ministry of Defence (Mindef) turned down young footballer Ben Davis' request to defer his NS so that he could play for Fulham Football Club in the English Premier League.

He said that in order to ensure Singapore's national security, every male Singaporean must serve NS, and at the time required to under the Enlistment Act, without regard to his personal convenience and considerations: "The Enlistment Act is blind to 'personal convenience and considerations', no matter how talented the individual, no matter how exceptional his circumstances."

To preserve equity for all national servicemen, Mindef will defer individuals very selectively, and only if their deferment serves Singapore's interest first and foremost, never their own, he added.

Dr Ng was responding to MPs' questions sparked by the public debate on Ben's case. The 17-year-old signed a two-year professional contract with Fulham in June after his deferment request was rejected.

Speaking on the long-term deferment for swimmers Joseph Schooling and Quah Zheng Wen and sailor Maximilian Soh to train and compete at the Olympics, Dr Ng said their deferment was not open-ended or unconditional. Clear expectations were laid out on the standards required for their training.

"They will have to return to serve NS, and if they do not meet the standards agreed upon, deferment will be curtailed. These strict conditions are necessary because even for these individuals who can bring glory to Singapore, there are detractors who think it is unfair for anyone to be deferred."

In Ben's case, Dr Ng listed three reasons for Mindef's rejection of his NS deferment application. The first is that he is playing for Fulham as an English national, not as a Singapore citizen. He was born in Thailand to an English father and Thai mother before moving to Singapore with his family when he was five. He became a Singapore citizen in 2009.

They will have to return to serve NS, and if they do not meet the standards agreed upon, deferment will be curtailed. These strict conditions are necessary because even for these individuals who can bring glory to Singapore, there are detractors who think it is unfair for anyone to be deferred.

The former student of the Singapore Sports School left the Republic to join the London-based club's academy last year. In his profile on Fulham's website, the youth is said to "hail from Singapore", but his nationality is listed as English.

The second reason is that Ben's father, Mr Harvey Davis, had "consistently refused to indicate" when his son would return to serve NS, if it is deferred. He had said Ben could be offered a new contract or sold or loaned to another club, so the family could not "commit to a date" for his return.

Third, Mindef said Mr Davis indicated that Ben would still sign the contract with Fulham if deferment were not granted - as he did - and would consider the option for his son to renounce his Singapore citizenship in order to pursue his football career.

"Mindef could not find any valid grounds to approve the application for deferment by Mr Harvey Davis for his son. There is no commitment to serve Singapore or our national interests," said Dr Ng.

"To grant deferment to Mr Ben Davis to pursue his personal development and professional career would be unfair to the many others who have served their NS dutifully as required, and not at a time of their choosing.

"The application by Mr Harvey Davis for his son's deferment is to further his son's professional career first and to the longest extent possible. Singapore and her interests, including his son's NS obligations, are secondary considerations, if at all." 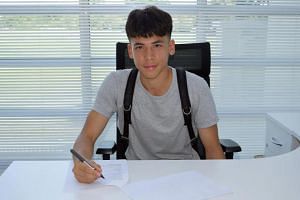 Dr Ng added that there had been "no indication, commitment or plans" as to how Ben's signing for Fulham would help raise football standards in Singapore, if the teen were granted a deferment.

Mr Davis had urged Mindef to approve deferment for his son so that Ben could serve as an inspiration for the 1,000 students registered with his company, Junior Soccer School and League Singapore. Dr Ng said that the youth football academy is a business run by Mr Davis and advertises itself as having links to Fulham.

Dr Ng said Mindef has exercised flexibility for sportsmen competing in international competitions, such as adjusting enlistment dates or giving them time off to train if they have enlisted.

He also cited three footballers who have completed their NS and are hoping to earn professional contracts in Europe.

National football coach Fandi Ahmad's two sons, Irfan and Ikhsan, are set for trials with Portuguese top-tier side Sporting Braga while national under-23 midfielder Saifullah Akbar is leaving for Spain today for a 10-day trial with Spanish second division side Tenerife, after completing his NS yesterday.

Dr Ng added that medical students are given NS disruption for them to complete their studies because they are needed to serve as medical officers during their NS. But dental students were not granted NS disruption after 1989 as there was no need for NS dental officers.

He said: "Some wanted to complete their university degree first before NS. Others said they had to support their families.

"In every judgment, the courts dismissed these personal reasons, convicted and sentenced them to jail terms... The critical need for a strong defence puts aside personal pursuits and mandates that each liable male performs his NS when required."