SINGAPORE - Introducing or teaching another person to consume or procure drugs will be an offence, under proposed changes to the Misuse of Drugs Act that was debated in Parliament on Tuesday (Jan 15).

This new category of offences tackles "contaminative behaviours" that may not meet the definitions of trafficking or abetment, said Home Affairs and Law Minister K. Shanmugam during the debate.

"But they contribute to the spread of drug abuse and cause harm to others," he said.

The new category of offences will tackle acts of contamination, such as introducing a person to a trafficker if one knows or has reason to believe that the person intends to buy or consume drugs that the trafficker is likely to supply them with.

It will also be a crime to teach, instruct or provide information to another person on the consumption, cultivation and trafficking of drugs, among other activities, knowing or having reason to believe that the person intends to carry out the drug activity.

The proposed amendments will also address the disseminating or publishing of information on carrying out of drug-related activities, making it an offence punishable with up to five years' jail and a $10,000 fine for first-time convictions.

Said the minister: "This can cover a range of behaviour, from the irresponsible - like posting information on how to manufacture drugs on social media where others can see it - to the downright malicious - such as trying to teach and influence their friends into taking drugs with them." 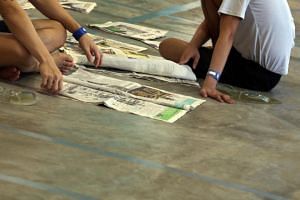 Repentant drug abusers who surrender themselves could be given shorter detention

However, there will be valid defences, including legitimate purposes relating to the administration of justice, science, medicine, education and art, not intended to promote drug offending, said Mr Shanmugam.

The proposed changes will also criminalise acts which expose children to drugs and those that permit young persons to consume drugs.

To better protect children, it will be an offence for an adult who possess drugs to knowingly or recklessly leave it within reach of the child.

It will also be an offence for an adult to allow, or not take reasonable steps to prevent, a person under 21, from taking drugs that are in the adult's possession.

Under the changes, it will also be mandatory for parents and guardians of youth drug abusers who are under supervision orders to attend drug counselling.

If the parents or guardians refuse to be involved in the child's counselling with no reasonable excuse, they can be fined or ordered by the court to attend the counselling sessions.