SINGAPORE - Wealth and inheritance taxes on ultra-high net worth individuals could be considered as a possible option for Singapore's tax system in the future, Ms Cheryl Chan (Fengshan) said in Parliament on Wednesday (Feb 27).

This would be an additional revenue source to sustain the many social welfare programmes that may have "a long tail in the years ahead", and help the country maintain fiscal prudence, she said on the second day of the debate on the Budget statement.

In a speech delving into inequality and ways to achieve a more equitable distribution of resources, Ms Chan said Singapore can be considered as having done well, with a system built on meritocracy, a fair and progressive tax system, and a redistribution of wealth focusing on social outcomes.

But in the last 10 years, evidence indicates the increase in wealth inequality has been greater than income inequality, she noted.

"Those with the wealth are not only on a better footing to accumulate more, they have even better access to resources that helps preserve their wealth," she added.

To reduce the wealth inequality gap, Singapore has taxes on personal income, property and consumption, so the top earners and those with more assets contribute to the national coffers, she noted.

But while Singapore has a low personal income tax rate - when compared globally - it is impractical to consider further taxes on income, owing to the shrinking and ageing workforce. 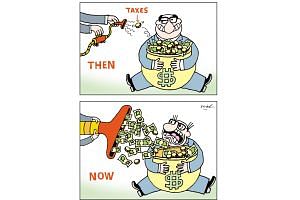 High taxes on the super-rich are back in vogue

"After all, the ability of an average income worker to build wealth is dependent on sheer labour. Also, the consumption tax in one way or other does impact the lower-income group to meet their basic living expenses," Ms Chan said.

She proposed looking into the option of a wealth and inheritance tax for ultra-high net worth individuals, or the top 1 to 2 per cent of society.

"In the spirit of giving and sharing, will the ultra-high net worth individuals be willing to share more of their wealth to uplift the vulnerable and less-privileged communities?" Ms Chan asked rhetorically.

She also called for a "decent living wage" for lower-income workers, in particular, those with young families, so that they can have more cash at the end of each month and not have to live hand-to-mouth.

The crux of the issue is how much consumers and employers are willing to pay to meet this living wage, she added.

"We cannot continue this path of racing to the last dollar for value of contracts, asking for more productivity from these workers without paying for tools or environment that aid their productivity improvement, assigning more tasks to them when we can do some on our own," she said.

Ms Chan said employers have a part to play as they balance their profits, re-invest in the workers and give the workers a decent wage.

"This comes back to the need for sharing. The top and middle tiers of the economy, while they have more opportunities and pathway to elevate, they can certainly do more for the lower-income group; starting with a willingness to pay more for their service," she added.

Ms Chan said the conversation about the inequality gap in Singapore will be "chatter", unless all in the country acknowledge that "we must all play a part and take actions in our daily lives to make Singapore an inclusive country".

"If we cannot convince ourselves to demonstrate the intrinsic values of this country, our future Budget debates and conversation with the public will be nothing more than package subsidies, Net Investment Return Contributions, and incremental shifts in economy and trade.

"Not that these are unimportant, but they will not move the needle nor set the long-term direction of our country.

"And without building our social capital now, defining the values and roles of this country with active civic participation, each Budget will only fall on the ears of citizens like a lecture in class and endless debate of whose rightful duty it is to care for the ageing population and the future generations," she noted.