SINGAPORE - Motorists who get into an accident involving any kind of animal may soon be required to stop their vehicle if it is reasonable to believe that the animal has an owner or if the animal will pose a hazard to other road users.

Currently, they have to do so for only eight types of farm animals of commercial value listed in the Road Traffic Act: horses, cattle, asses, mules, sheep, pigs, goats or dogs.

Under the Road Traffic (Amendment) Bill tabled in Parliament on Monday (May 6), this could change, with the definition of "animals" expanded to the general definition of the word.

The proposed changes also expand the obligations of motorists to stop in the event of an accident involving an animal in its updated definition, if it is reasonably believed that it has an owner or if it poses a road safety hazard to others.

The motorist would then be required to contact the owner of the animal, and alert other road users to the accident if it is safe to do so.

Other amendments to the Act include a four-week period for motorists who have accumulated more than the maximum allowable demerit points to appeal against the suspension or revocation of their licence.

The suspension or revocation of the licence will take place after four weeks, unless the motorist's appeal is successful. 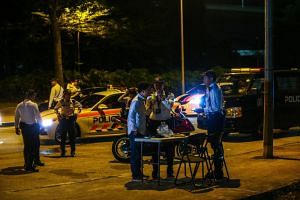 The Traffic Police will also be allowed to suspend a motorist's licence for up to five years under the amendments, up from three years currently, for those who have five or more prior suspensions.

The Bill also clarifies that the courts are allowed to consider a motorist's record of his relevant past compounded offences as an aggravating factor for sentencing, as an indicator of his driving behaviour.

In addition, the proposed changes will allow all of an individual's probationary licences to be revoked if one of the licences is revoked.

In another proposed change to the Road Traffic Act, motorcyclists or pillion riders who do not wear proper protective helmets will face increased penalties, up from the current fine of $200 - which is lower than those of other similar minor offences.

In the updated penalties, offenders will face jail of up to three months, or a fine of up to $1,000, or both.