SINGAPORE - The minimum age to get monthly payouts from Central Provident Fund (CPF) savings will not be lowered for now as it was raised to 65 only last year, Manpower Minister Josephine Teo said on Tuesday (Jan 15).

Workers appear to be more concerned about being able to work longer and save more, she told Parliament, which is why her priority this year will be to build a new consensus between workers, employers and the Government on the retirement and re-employment ages.

She was replying to Ms Lee Bee Wah (Nee Soon GRC), who said retirees have approached her asking for an earlier payout as they do not have enough money but are healthy and cannot appeal on medical grounds.

In fact, said Mrs Teo, more than half of the Organisation for Economic Cooperation and Development countries, which are developed nations, have set their pension withdrawal age at 65 or older.

Some are raising it, in the light of increasing longevity, she added.

For example, the withdrawal age in The Netherlands, Denmark and Germany is being raised gradually to reach 67 by 2021, 2022 and 2029 respectively.

"So against such a backdrop, we must really ask if it is wise to lower our own PEA (payout eligibility age)," she said, referring to the minimum age at which CPF members can start receiving their monthly CPF Life payouts. 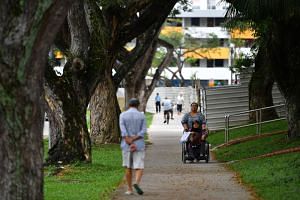 Should you withdraw CPF cash at age 55?

But CPF members who are permanently incapacitated or terminally ill, for example, can apply to withdraw or start their payouts before age 65 under the Medical Grounds Scheme. The majority of applications - about 65 per cent - in the past three years have been successful, said Mrs Teo.

She also disclosed that the payout eligibility age was not a major concern for workers during feedback sessions held by the Tripartite Workgroup on Older Workers.

The group, to which she is an adviser, began its review of the retirement and re-employment ages, as well as the impact of CPF contribution rates on retirement adequacy, last year.

Mrs Teo said she has since met union leaders from various industry clusters such as aerospace, logistics, healthcare, financial services and the public sector. The feedback received from these sessions, as well as from focus group discussions with the public, was that workers want the opportunity to work longer and save more.

"I hear these workers and I understand them, and I want to be able to help make it happen. At the same time, the employers have also expressed their concerns to me. They have worries about their increased obligations,'' she said, adding that their considerations should not be taken lightly or dismissed.

"The new tripartite consensus is an important one and is the topmost of my priorities this year."

The re-employment age was raised from 65 to 67 in 2017, with employers required to offer eligible workers re-employment till 67 or a one-off payment if no jobs are available.