SINGAPORE - The reliability of Singapore's MRT network has increased by more than three times since 2017, but this has taken a toll on the train operators, Transport Minister Khaw Boon Wan said in Parliament on Wednesday (Feb 13).

The improvement was the result of rail operators SMRT Trains and SBS Transit intensifying their operating and maintenance regime.

But this has caused SMRT and SBS Transit's Downtown Line to chalk up operating costs that are significantly higher than their fare income in their respective financial years ending March 2018 and December 2017 .

Mr Khaw, referring to the Downtown Line's latest financial results, which were unveiled on Tuesday, said: "We are combing through the results, and I believe Downtown Line continues to be in a pretty bad shape."

He was replying to Nominated MP Walter Theseira, who asked about the amount of government grants and subsidies expected to be used to cover the operating costs of MRT lines.

When contacted, SBS Transit said the Downtown Line’s losses in 2018 was smaller than in the previous year.

In Parliament, Dr Theseira also asked Mr Khaw about the Government’s plans should operators continue to suffer substantial operating losses. He pointed out that the fare formula, which is in place until 2022, does not account for the increased maintenance expenditure.

Mr Khaw said the issue will have to be addressed by the Public Transport Council (PTC), which determines fares for public transport.

He added: "What we have learnt in the last three years is reliability is an engineering problem. It can be fixed, but you need money, you need resources, you need time. 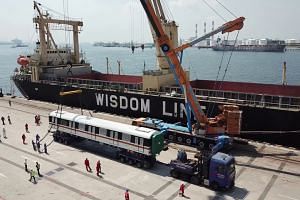 Bus and train fares to rise by 6 cents per trip from Dec 29: PTC

"The secondary question is how do you share the money... you are talking about sharing between taxpayers through government subsidies, and commuters, through some fare adjustments."

On the issue of government grant and subsidies for MRT lines, Mr Khaw said the Government has invested and subsidised heavily to ensure that Singapore's rail network is "reliable, convenient and affordable".

It is spending about $25 billion in the next five years to expand the MRT network, with the building of the Thomson-East Coast Line, Jurong Region Line and the Cross Island Line.

About $4.5 billion will also be spent in the next five years to build, replace and upgrade rail operating assets in the network, including trains and signalling systems.

"We will continue to work towards improving rail reliability, making our rail network among the most reliable in the world," said Mr Khaw.

"We are, however, mindful that any decision to increase the level of government funding for rail operations has to be weighed against competing needs, such as healthcare and security."