SINGAPORE - As Singapore commemorates its bicentennial and reflects on its history, the country also has to accept that the colonial experience has had a different impact on its various communities, said former minister Yaacob Ibrahim in Parliament on Wednesday (Feb 27).

"We need to acknowledge that different communities have different historical experiences and memories," said Dr Yaacob (Jalan Besar GRC). "We need to recognise both the good and the bad."

Although 1819 is marked as a turning point in Singapore's history, it has also given rise to myths and misperceptions that damage communities here, he added.

One of these is the myth that Singapore was a fishing village "waiting to be discovered by enlightened British imperialists", rather than the vibrant economic hub that historical evidence suggests.

Another is the toxic myth of the lazy native, which has been studied and debunked but yet still lingers in the minds of some people, said Dr Yaacob, the former minister for communications and information as well as former minister-in-charge of Muslim affairs.

"When I was growing up in modern Singapore, my own teachers dismissed my community as being lazy and unable to study hard. This is the burden of history that my community carries. It is unjust and unfair," he added.

"If we are to commemorate the bicentennial, we must also recognise the less savoury aspects of it - practices and ideas designed to meet the needs and maximise the profits of the empire at the expense of the indigenous population." 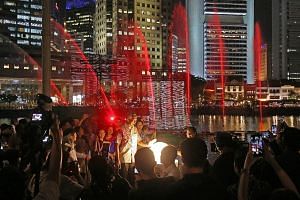 1819 - the start of a modern, multicultural Singapore

Dr Yaacob said it is right to acknowledge every event for what it is worth, and that the colonialists' arrival changed the region forever. But overly-ascribing Singapore's present-day success to the arrival of the British ignores "larger forces" at work before they set foot on Singapore's shores, he said, adding that instead of focusing on the past 200 years, Singapore should look at 1819 as "one milestone among many".

He also noted that "our history is intertwined with that of the region". It is a point that needs to be stressed as Singapore commemorates its bicentennial year. "The diversity that we see in Singapore reflects the diversity of the region and beyond."

In doing so, more Singaporeans - especially the young - will understand how Singapore is a part of the larger region, tapping its good location and talents of its diverse peoples to provide a peaceful hub for trade and commerce, he said.

Dr Yaacob suggested changes to the school curriculum, including relooking the history curriculum to ensure students are well-versed in pre-colonial history and have a deeper understanding of the region.

National education can be expanded for local students to understand the colonial experiences of other Asean countries, he added.

"Talk about both the good and the bad so that we know ourselves better and will never again be divided or colonised," he said. "Being part of this region, I strongly believe that we should have a good understanding and appreciation of the region's history."