SINGAPORE - Parliament passed a law on Monday (Oct 1) that will make the running of elections more efficient, spelling out, among other things, what to do when ballot papers are lost or destroyed.

Other key changes include allowing candidates to use electronic fund transfer systems to pay their election deposits, while cash payment can be accepted only if the Returning Officer allows it.

Wrapping up the debate on the Parliamentary Elections (Amendment) Bill, Trade and Industry Minister Chan Chun Sing said the changes "improve the administration of parliamentary elections while ensuring the secrecy of the vote and the integrity of the election process".

Mr Chan, who was taking the Bill on behalf of the Prime Minister, said: "They are part of the continuous improvements to strengthen election administration and to improve services to voters and candidates."

A total of three MPs, two Non-Constituency MPs and one Nominated MP spoke on the Bill.

While there have been no incidents in past elections of ballot boxes being lost or damaged before the votes could be counted, Mr Chan said that the new law will "ensure the integrity of the election process" by clearly laying out the steps to take.

In such an occurrence, election officials can abandon the vote count for the affected polling station, and should the number of votes in the particular polling station be enough to sway the electoral result for that constituency, the voters in the polling station must undergo a fresh poll. 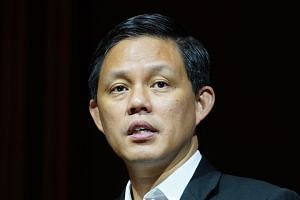 On the matter of election deposits, Mr Murali Pillai (Bukit Batok) asked whether the amended law would still allow candidates to use cash.

Workers' Party chairman Sylvia Lim (Aljunied GRC) also questioned whether cash was only allowed if electronic transfers failed, adding that the new rule seems to "set another barrier" for candidates who may be raising money up to the very last minute and may not be able to make the electronic transfer.

Mr Chan replied that the hope is for the primary method to be e-payment, but in extenuating circumstances, the Returning Officer will exercise the discretion to allow cash payment.