SINGAPORE - Knowing how to identify "charlatans" is important for young people in order for them to act responsibly and legally when pursuing political and social causes, said Home Affairs Minister K. Shanmugam in Parliament on Monday (Oct 7).

In addition, knowledge about world affairs, how different political systems work, Singapore's recent history, and how the balance between state power and individual autonomy is struck in different societies, are also important, he added.

These were among points the minister laid out in his reply to Nominated MP Walter Theseira, who asked how the minister could assure students of their right to take part in causes here responsibly and within the law.

Mr Shanmugam, who is also Law Minister, agreed that it was important for students to know their rights and responsibilities.

Similarly, they need to know "how to identify charlatans, those who promise the world and deliver nothing", he said. A charlatan is a person who deceives, often to gain advantage.

The exchange comes in the wake of a debate on the cancellation of a Yale-NUS College course about dissent and resistance, which had included film screenings, dialogues with activists, and a workshop on designing protest signs.

Associate Professor Theseira also wanted to know if the Ministry of Home Affairs regulates or monitors political activities of student groups in these universities.

Mr Shanmugam said his ministry's agencies focus on those who engage in activities that endanger national security. 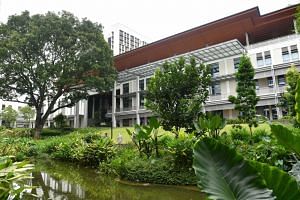 Why Yale-NUS course on dissent was scrapped: Ong Ye Kung

Decision to cancel Yale-NUS module on dissent made without government interference: Yale president

Citing past instances in which foreign workers or a 17-year-old Singaporean were arrested for taking part in terror-related activities, he said that did not mean the agencies monitor all 17-year-olds or foreign workers.

"We do not and we cannot, and we are unable to monitor all of them. The agencies have their own ways of identifying security threats, and they will take appropriate action, in context."

Prof Theseira noted that Mr Ong had listed groups of individuals that academic institutions should not work with, for example, those that had committed public order-related offences or have shown disloyalty to Singapore.

He asked Mr Shanmugam if that also meant student groups would not be allowed to engage with such individuals, in view of security risks.

The minister said such individuals do not "ipso facto" become security risks, meaning they do not become threats to security as a direct consequence of being individuals that schools should avoid engaging.

"If they do become security risks, they will be monitored," he added.

NMP Anthea Ong asked for the Home Affairs Ministry's position on online sentiments that having a course on dissent is an "unpatriotic act" and the hate speech being directed at Yale-NUS students.

Mr Shanmugam replied: "If there is speech that has been directed at some students, and they believe that a criminal offence has been committed, they can file a police report - I am sure they are aware of that.

"I assume that you are not suggesting that we prevent people from expressing their views on whether some actions are patriotic or unpatriotic?"