SINGAPORE - The current hostilities between India and Pakistan are an illustration of how "dangerous trends" - such as the waning support for multilateralism and states being more inclined to take unilateral action against one another - can collide, said Mr Vikram Nair (Sembawang GRC) on Thursday (Feb 28).

Closer to home, Mr Nair said he is glad that bilateral matters with Malaysia appeared to have cooled down, thanks to Singapore's leadership team at multiple levels, including the ministries of foreign affairs, transport and defence.

"However, the fact remains that there are two Malaysian government vessels in our territorial waters and if there is any escalation or threat to our sovereignty or territorial integrity, we have to ask ourselves the uncomfortable question of what we will do," Mr Nair said on the third day of the debate on the Budget statement.

Singapore and Malaysia have been locked in a maritime dispute after Malaysia unilaterally extended the Johor Baru port limits in October 2018, encroaching on territorial waters that Singapore regards as its own. A joint working group has been formed and is studying the legal and operational matters to de-escalate the situation on the ground.

While these aspects received less attention during the Budget debate, Mr Nair said it is important for Singapore to "remain committed to our security needs and to anticipate and deal with the new threats we face".

He said multilateralism is under unprecedented challenge and nationalism is on the rise.

In the post-World War II era, institutions such as the United Nations, World Bank, International Monetary Fund and World Trade Organisation were set up to facilitate multilateral cooperation on important matters for countries, namely, security, trade and financial systems, he said. 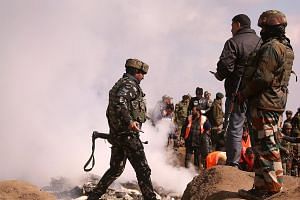 After India's strike on Pakistan, both sides leave room for de-escalation

Regional alliances for security and trade continued to develop during this period and Singapore is involved in many of these alliances. "These provided important opportunities for Singaporeans and Singapore businesses to thrive," Mr Nair added.

But he highlighted that in recent years, multilateralism has started to lose its support among countries in the developed world that had set up these institutions.

"In the absence of a strong multilateral threat against the use of force, countries may be more inclined to take unilateral action against each other or against non-state actors in another state's territory, which is a tinderbox," he said.

Mr Nair recounted the sequence of events that led to the escalating tensions between India and Pakistan, which started when an Indian military camp was attacked by a terror group called Jaish-e-Mohammed and 40 people were killed.

India retaliated by carrying out a bombing operation on Pakistan which it claimed was targeted at the Jaish-e-Mohammed training camp. But Pakistan denied there was any training camp operating there and has since retaliated, he said.

There have been firefights in Kashmir and Indian aeroplanes have been attacked, and one Indian Air Force pilot captured.

"Matters are clearly escalating quickly and this is worrying because both are nuclear powers and the consequence of any miscalculation would be dire," Mr Nair told the House.