SINGAPORE - Pay packages of the top brass at sovereign wealth fund GIC and Temasek are based on performance and industry benchmarks, Second Minister for Finance Lawrence Wong said in Parliament on Wednesday (May 8).

"The Government maintains an arms-length relationship with the companies and does not interfere in their operational decisions such as remuneration," he added.

He also said the Government holds the boards at GIC and Temasek accountable for their performance.

Mr Wong was replying to opposition MP Png Eng Huat (Hougang), who asked if key management staff at Fifth Schedule Statutory Boards and Government Companies, such as GIC and Temasek, had a remuneration cap.

Mr Png also wanted to know how much the top three highest-paid executives in GIC and Temasek received in the last five years, including their salary and annual and performance bonuses.

Mr Wong, who is also National Development Minister, said staff remuneration at GIC and Temasek are decided independently by their boards as they are commercially-run companies.

"This ensures that they can attract and retain capable people." 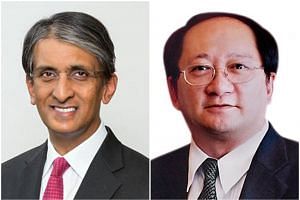 Their pay packages also aim to support and reinforce a prudent risk-taking culture as a portion of staff remuneration in both companies is tied to long-term performance, Mr Wong added.

"Staff, including senior management, are rewarded for long-term sustained performance, rather than a focus on short-term gains."

Mr Wong pointed out that the Government evaluates GIC and Temasek's performance based on long-term returns, net of all expenses incurred.

"These figures are published in their annual reports, and they show that both GIC and Temasek have performed creditably under challenging market conditions."