SINGAPORE - The Government will take steps to ensure parents have access to affordable infant milk powder, such as by reviewing import requirements to facilitate more options on shelves here and making more infant formula options available in hospitals.

The Agri-Food and Veterinary Authority will also strengthen restrictions on labelling and advertising of infant milk powder, including prohibiting the use of nutrition and health claims and idealised images for infant formula milk, Senior Minister of State for Trade and Industry Koh Poh Koon told Parliament on Monday (May 8).

While some infant formula companies give the impression that their particular brand of milk or milk powder can do more for children, the scientific evidence for this is weak, he said.

"All infant formula sold in Singapore regardless of their price meets Singapore's food regulations and nutritional needs for infants to grow healthily. Parents should therefore be careful about relying on the claims made by infant formula companies or be misled into using price as a proxy for quality of the product," he said, stressing that cheaper options are no less nutritious.

"As long as your child can get used to the milk or they are not suffering from any allergic reaction to that particular brand of milk, there's no real reason to pay more for something that is just as good and much cheaper," said Dr Koh. 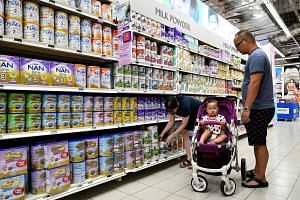 He was responding to Ms Tin Pei Ling (MacPherson) and other MPs on the rising cost of infant milk powder. The increase in milk powder prices in Singapore far exceeds the inflation rate, and is also higher than in other countries, leading some parents to feel that they are being held "ransom", said Ms Tin.

The Straits Times reported in March that the average price of a 900g tin of formula here has increased 120 per cent over the last decade to $56.06, outstripping the increases of other dairy products and household staples.

While the Health Promotion Board (HPB) encourages breastfeeding exclusively for at least six months due to its health benefits for the baby, the Government recognises that in some cases, infant formula is needed as a form of supplementation or the main form of feeding, said Dr Koh. Children above 12 months do not require formula, however, as cow's milk together with a balanced diet is adequate to meet their nutritional needs, he said.

In an interview with The Straits Times on Friday (May 5), Ms Sun Xueling (Pasir Ris-Punggol GRC) noted that a concentrated market gives suppliers more pricing power.

According to market research provider Euromonitor International, Nestle, Abbott, Mead Johnson Nutrition, FrieslandCampina and Danone made up more than 99 per cent of the fortified milk formula market share in Singapore in 2016, with Abbott making up nearly half of the local market.

Parliament: Changes to rules of parliamentary proceedings and conduct accepted
Parliament: Govt will take steps to ensure affordable infant milk powder options
Parliament: Target for half of all F&B outlets to use digital technology, payments by 2020
Parliament: SMEs made up 80% of companies that got help venturing overseas
Parliament: HDB flats made up 73% of Singapore's total housing stock in 2016
Parliament: Expect more choices in higher education despite falling student cohort sizes, says Ong Ye Kung
Parliament: More subsidised dental facilities in the offing to meet rising demand

The Competition Commission of Singapore has completed a market study of the milk formula industry here and will publish its report this week, said Dr Koh.

But to encourage more competition, the Government will simplify and streamline import requirements as well as remove unnecessary barriers to entry in order to bring in more options for parents without compromising on food safety, he said.

While the HPB's Sale of Infant Food Ethics Committee Singapore already has a code of ethics that restricts advertising, marketing and promotion of infant formula to infants below six months, it is supporting an ongoing review to extend coverage to all infant formula for up to 12 months of age.

Enhanced consumer education efforts, increased choices and the improved clarity of labelling should enhance the competitiveness of the infant formula market, he said, while help is available for those that need it.

Ms Sun said in a Facebook post that the review of import requirements is important. With more choices of infant milk formula for consumers, more sources of supply and hence greater competition in the market, prices should level out over time.

In a release on Monday, FairPrice said that it supports the Government's call to address the rising prices of infant formula.

Said FairPrice chief executive Seah Kian Peng: “We agree that more public education and understanding on the benefits of infant milk formula will help parents make more informed choices, and a review of import requirements will help us to provide better value options for our customers.”

To help offset rising prices, all five community development councils and the NTUC FairPrice Foundation banded together in February to fund a $1.5 million milk scheme, providing 7,500 low-income families with vouchers to buy milk powder this year.