SINGAPORE - Singapore is clear in its position as to why it bars certain foreign religious preachers from entry, said Home Affairs and Law minister K. Shanmugam in Monday's (Jan 8) parliamentary sitting.

They will be banned if they preach religious intolerance or seek to divide society along religious lines, said Mr Shanmugam, in response to questions by Mr Faisal Manap (Aljunied GRC) and Mr Zaqy Mohamad (Chua Chu Kang GRC) on bans against three foreign preachers last year.

Said Mr Shanmugam: "If he has advocated violence, or promoted segregationist and intolerant teachings that are inimical to our multiracial, multi-religious society, he will not be allowed in."

Such entry bans can be meted out regardless of the size of the preachers' followings here or whether their comments were made in relation to Singapore.

Any foreigner who wants to talk about sensitive issues concerning religion, race or politics in Singapore must obtain a Miscellaneous Work Pass from the Manpower Ministry, which will consult other agencies and assess each application on its own merits.

American Muslim preacher Yusuf Estes was denied entry into Singapore last November for having expressed views that the authorities said are "unacceptable" and "contrary" to the values of Singapore's multiracial and multi-religious society.

All three had been scheduled to join a five-day spiritual luxury cruise for international passengers from Singapore to Aceh, organised by Malaysia-based Islamic Cruise.

Although he was banned here, Mr Estes flew to Banda Aceh to address cruise passengers when the ship arrived there later on. 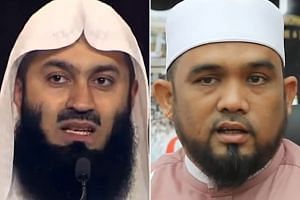 Mr Shanmugam explained why the preachers should be banned from physically entering Singapore, even if people can still access their teachings online.

"Preaching and grandstanding live and in person, is quite different a proposition from doing so on the Internet," he said.

Mr Faisal of the Workers' Party asked if the preachers were given an opportunity to explain themselves before the ban was imposed, or to appeal against it.

In reply, Mr Shanmugam cited a few statements made by the preachers, which espoused that Allah was a "false god" and criticised other religions.

"Do you believe we should invite him into Singapore and interview him, or should we ban him outright?" he asked Mr Faisal.

Entry into Singapore is neither automatic nor a right for foreigners, but a privilege, Mr Shanmugam noted.

"It will only be granted if we assess that his entry will not harm Singapore's interests," he added.