SINGAPORE - Marsiling-Yew Tee GRC MP Ong Teng Koon wants the Government to further subsidise the cost of raising children in Singapore, given that the country's ageing population and low fertility rate are "existential issues" for the country's survival.

"We have to ask ourselves - what is the value of each additional child to Singapore?" said Mr Ong in Parliament on Wednesday (Feb 27). "Would we consider it a worthwhile investment of national resources?"

"There seem to be fewer stable jobs these days. Many companies are also moving towards contract and freelance work, which increases income uncertainty," said Mr Ong, adding that retrenchment is also no longer a once-in-a-blue moon event.

"To delay or avoid having children altogether would be a rational response when faced with such financial uncertainty," he said.

In 2017, Singapore's total fertility rate plunged to a seven-year low of 1.16, which is below the replacement rate of 2.1. 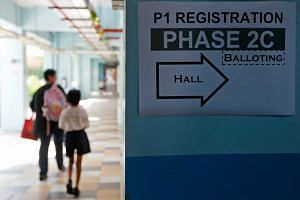 Child entering Primary 1 last year to receive over $130,000 in education subsidies by end of secondary school

But countries such as Sweden and Norway have managed to raise their total fertility rates, and their experience suggests that addressing cost of living issues is important, Mr Ong said.

The two countries, he added, have shown that providing good work-life balance for mothers can help boost a country's fertility rate. At the minimum, mothers would benefit from being able to work remotely and having flexible hours.

"But how many employers are enlightened, or do they need government nudging or government coercion?" he asked.

On the cost of living in general, Mr Ong said he has met residents who are struggling to cope as the costs of healthcare, education and food go up. Others feel they are "running harder than ever to stand still", he added.

He stressed the importance of continuing to keep income taxes low.

"This allows us to keep money in our pockets and let us decide how we would like to spend it," he said.

Mr Ong concluded his speech by saying that if Singapore's low fertility rate poses an existential threat to the country, tackling it should be the country's highest priority.