SINGAPORE - The Workers' Party (WP) on Monday (Oct 1) reiterated its longstanding opposition to the Non-Constituency MP (NCMP) scheme during a parliamentary debate, but Trade and Industry Minister Chan Chun Sing said it was being "rather disingenuous" for doing so.

Mr Chan, the People's Action Party (PAP) Whip, said that while the WP was against the scheme, its candidates were still taking up the NCMP seats.

The issue of the NCMP scheme was brought up during the second reading of the Parliamentary Elections (Amendment) Bill.

Among the various changes to the law which were passed, one will increase the minimum number of opposition MPs, including NCMPs, in Parliament from nine to 12. This change is in line with an amendment made to the Constitution in 2016, which all six WP MPs voted against back then.

NCMP seats are offered to the best-performing losing opposition candidates. The WP's position was that the NCMP scheme dissuades people from voting for the opposition, and goes against the principle that only elected lawmakers have a mandate to represent the people.

WP's Png Eng Huat (Hougang) said on Monday (Oct 1) that he supported the Parliamentary Elections (Amendment) Bill, with the exception of the change to the NCMP scheme.

"We oppose the scheme as we believe in the fundamental principle that having more NCMPs is not the way forward to make our political system more robust," Mr Png said.

Speaker of Parliament Tan Chuan-Jin, however, advised MPs that the NCMP subject was not relevant to Monday's debate. 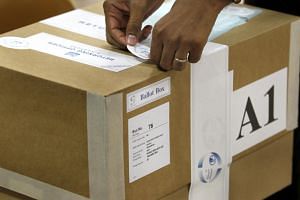 In his speech to wrap up the debate on the Bill, Mr Chan said the WP has two choices if it feels unable to support the NCMP scheme.

One, he said, was for a WP candidate to publicly declare during an election that he or she will not take up the NCMP seat even if offered. The other was for the WP to impose a rule on all its members not to take up an NCMP seat, even if it is offered.

Mr Chan said: "I think with these two options in front of us, the Workers' Party can take its pick on what it wants to do. But it would be rather disingenuous to say that we oppose the NCMP scheme and, at the same time, to take up the NCMP seat."

There are currently three NCMPs in the current Parliament, and they are the WP's Mr Leon Perera, Mr Dennis Tan and Dr Daniel Goh.