SINGAPORE - Singaporeans can expect a rejuvenated city centre with moves taken to encourage more mixed-use development in the Central Business District (CBD) so that there will be activities beyond office hours.

National Development Minister Lawrence Wong, in announcing this on Thursday (March 7), also said there will be a review of a scheme that allows eligible commercial buildings to maximise their use through bonus plot ratios.

Speaking during the parliamentary debate on his ministry's budget, Mr Wong said: "We will explore new incentives to better support rejuvenation in the CBD. Specifically, we want to encourage more mixed uses in the CBD, such as residential and hotel, so that there will be activities beyond office hours."

Mr Wong noted that older office developments largely dominate the city's core area: Raffles Place, Tanjong Pagar/Maxwell, Robinson/Shenton. This is quite unlike the Marina Bay CBD extension which was planned as a mixed-use district.

He added: "Most eligible buildings have already made use (of the existing scheme) to maximise their development, so it is timely for us to review.''

Mr Wong also noted plans to revamp Orchard Road, like having different precincts with more diverse offerings, to make the stretch "one of the great streets of the world".

Longer-term plans are afoot in other parts of Singapore: An expansive Greater Southern Waterfront stretching from Pasir Panjang to Marina East as well as the redevelopment of the Paya Lebar Air Base site.

The 800ha site vacated by Paya Lebar Air Base will have residential and commercial developments, and work on the area - which is bigger than Ang Mo Kio town - will start after 2030. 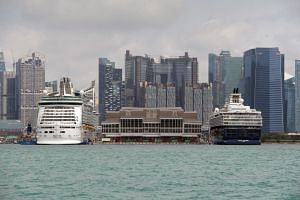 However, the development process for the Greater Southern Waterfront will begin in the next five to 10 years.

It is the result of the relocation of ports that will free up 1,000ha of land, with the remaining 1,000ha coming from other areas like the Pasir Panjang Power District, Keppel Club and Sentosa.

Mr Wong added: "Over time, we will redevelop and stitch together the entire waterfront from Pasir Panjang to Marina East. It will be an exciting new waterfront development with green and blue spaces for all to enjoy."

Some of the initial work will include relocating the existing substation in Pasir Panjang underground and enhancing green spaces in Mount Faber. Residential development is among the options for the plot on which Keppel Club now sits, after the land is returned to the authorities.

He said: "These key developments will help support our growth and create more jobs across the island. There will be more opportunities for Singaporeans to work closer to their homes."

He also said work is being carried out on islands such as Sentosa, Pulau Tekong and Pedra Branca for, respectively, attracting tourists, military training and maritime security.

Building boldly: 5 things you might not know about infrastructure planning in Singapore

Calling climate change an existential threat, he also said the risks and impact of the rise in sea level have been studied carefully and the Government is looking at detailed measures to protect Singapore's coastal areas. These may include reclamation, sea walls or pumping stations.

"These are long-term investments, but we are preparing well ahead and putting in place the necessary protective measures within the next 20 to 30 years," he added.

Mr Wong also announced that the Urban Redevelopment Authority will launch the draft Master Plan 2019 exhibition later this month, and it will be open to public feedback. The plan, reviewed every five years, guides the country's urban development over a 10- to 15-year timeframe.