SINGAPORE - Two groups of MPs have introduced in Parliament motions to discuss the issues of ageing and support for caregivers.

One group is calling for efforts to ensure Singaporeans age with purpose, in good health and with financial stability. The other group wants the Government and the community to continue strengthening support for caregivers.

More than 20 MPs were expected to speak on the two motions concurrently. Here are some of their suggestions:

Many seniors find purpose in work, and more opportunities must be created for them to work as long as they want or are able to, said Mr Henry Kwek (Nee Soon GRC), who is vice-chairman of the People's Action Party (PAP) Seniors' Group.

Ms Lee Bee Wah (Nee Soon GRC) similarly said many elderly people "want to feel useful to society, in a way that is manageable for them".

Ms Tin Pei Ling (MacPherson) called for ageism to be stemmed out. Ms Tin said the Government can take the lead in testing how work environment, workflows, job role designs and even compensation and benefits, like health benefits, can be optimised for senior workers. 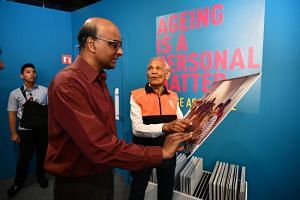 Continue to work and learn as part of active ageing: DPM Tharman

3. Retirement homes in the private sector

Ms Rahayu Mahzam (Jurong GRC) urged the National Development and the Health ministries to look into revising guidelines to enable and promote the setting up of group homes or retirement homes with assisted living facilities in the private sector.

"This could mean creating a new strata title category and legislation which could ring-fence non-seniors from purchasing such properties and deal with the conversion or transfer of ownership upon demise of the owners," she said.

Mr Zainal Sapari (Pasir Ris-Punggol GRC) called for building owners to set aside rest spaces for elderly workers, especially for outsourced cleaners, security officers and landscape workers. This gives them a greater sense of dignity and self-worth "knowing that their basic needs are provided for at their work sites", added the assistant secretary-general of the National Trades Union Congress.

5. Keeping elderly active with the arts

Citing studies which show that attending or taking part in arts-related events benefits the mental and physical health of the elderly, Nominated MP Ho Wee San called for more support and resources from the Government, companies, enterprises, and the public, to make the arts more accessible for senior citizens.

Mr Chen Show Mao (Aljunied GRC) wants more financial assistance to be given to caregivers, especially those who give up their jobs to take care of family members. Mr Christopher de Souza (Holland-Bukit Timah GRC) also suggested that the Government consider a caregiver allowance, particularly for full-time caregivers taking care of an elderly person with disabilities or mental health problems.

Having caregiver leave and flexible work arrangements can help caregivers better deal with situations when an elderly parent falls ill suddenly, said Dr Chia Shi-Lu (Tanjong Pagar GRC), who chairs the Government Parliamentary Committee for Health. He also called on the Manpower Ministry to examine potential roadblocks to companies implementing flexible work arrangements and work with them to overcome the obstacles.

Recounting the experience of a burnt-out caregiver whose father was often active at night because of dementia, Ms Tin called for respite care beyond the conventional working hours.