SINGAPORE - As the first country in South-east Asia to put a price on carbon emissions, Singapore could run the risk of becoming less competitive than countries with no such tax, said some MPs as they asked for more details about the impending carbon tax.

Yet, all eight who spoke up in Parliament on Tuesday (March 20) gave their support to the Carbon Pricing Bill, saying it was a crucial step in ensuring that future generations are shielded from the worst effects of climate change.

Climate change is caused by greenhouse gases like carbon dioxide, which trap heat.

But from next year, all facilities producing 25,000 tonnes or more of greenhouse gas emissions in a year will have to pay a carbon tax, as Parliament passed the Bill to give Singapore the legal muscle to help in the global battle against climate change.

The tax is aimed at curbing large emitters from polluting the environment and spurring them to use cleaner sources of energy like solar, or to invest more in energy-efficient equipment.

Minister for the Environment and Water Resources Masagos Zulkifli, in responding to MPs' concerns, stressed that the pursuit of environmental sustainability and economic growth is not a zero-sum game.

"It is a strategy to stay competitive. They can do good and do well at the same time," said Mr Masagos, citing two companies that have done both. 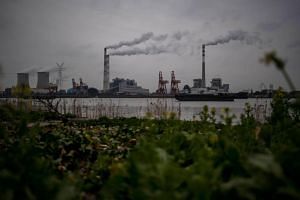 Globalfoundries, a semiconductor company, had redesigned equipment and reduced its petrol consumption by 31 per cent. "This resulted in annual cost savings of about $260,000 and an annual carbon abatement of about 640 tonnes," said Mr Masagos.

Fuel company Chevron Oronite also netted annually energy savings of $1.8 million and a carbon abatement of 4,800 tonnes by installing new equipment, like a boiler system that can recover waste heat from other processes to generate steam.

But Mr Masagos acknowledged that the 30 to 40 companies affected by the carbon tax needed time to make adjustments.

Meanwhile, various government measures have been implemented to help companies move towards a low-carbon future, he told the House.

For example, to give companies time for the transition, the Government has set the carbon tax at an initial $5 per tonne of greenhouse gas emissions from 2019 to 2023. This rate will be reviewed by 2023, with plans to raise it to between $10 and $15 per tonne of emissions by 2030, he said.

Revenue from the carbon tax will also be used to fund green initiatives of large emitters as well as small and medium enterprises, Mr Masagos added.

As for the tax effect on households, he said it is likely to be small, in the range of 1 per cent of total electricity and gas expenses on average.

Still, an additional U-Save rebate will be given for three years to help Housing Board households. Eligible households will each receive $20 more a year, from 2019 to 2021.

This will tide them over when their electricity and gas expenses are expected to rise, and give them time to reduce their consumption, he said. The Government will review the need to extend the rebates later.

Beyond the rebates, it is also important to encourage energy-saving habits in households on a sustained basis, Mr Masagos said.

A lamp replacement programme is one way of doing so, with the Government helping families living in one- and two- room Housing Board homes by replacing their bulbs with more energy-efficient LED lights.

He added: "The Bill is an important step forward - not only in encouraging industry to do their part for the climate, but also in readying our economy and strengthening our competitiveness as the world transitions to a low-carbon future.

"Companies ignore these realities at their peril."