She announced the good news on Facebook hours later, writing: "I'm happy to share that I've 'popped'! It's a healthy baby boy."

NTUC Secretary-General Chan Chun Sing also shared a photo of Ms Tin and her new-born child on his Facebook page.

But hard work lies ahead for the new mother, who will be fielded in MacPherson SMC in the coming polls. Emeritus Senior Minister Goh Chok Tong, who has been MP at Marine Parade GRC for close to 40 years, put the news up on Facebook on Wednesday.

Ms Tin's MacPherson ward is currently a part of the five-man GRC, but has been carved out as a single seat for the next general election. 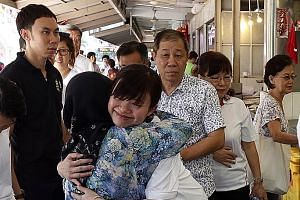 Mr Goh had dropped by Singapore General Hospital on Wednesday afternoon to visit Ms Tin, her husband, Ministry of Law Permanent Secretary Ng How Yue, and their son.

"Mother looks radiant and baby (boy) ruddy. Father is, of course happy," he wrote on Facebook later. "Lest she is anxious, I passed the message from the Party that she will be fielded in MacPherson in the coming GE."

The post comes as confirmation for Ms Tin, who has said that she wants to continue serving in MacPherson, where she has spent her first term as MP.

Mr Goh added: "I advised her to rest and not worry about the date of the GE. She will not be there at the National Day Parade, but there will be time for her to turn up at Nomination (Day), and campaign thereafter."

Ms Tin, 31, entered politics in 2011. She is the third MP to give birth in recent years after Workers' Party MP Lee Li Lian, who had her first child last year, and Minister of State for Education Sim Ann, who gave birth to her third child in 2011.