His manifesto centres on jobs, healthcare and social mobility

A new healthcare cooperative and job placement programme were among the plans unveiled yesterday by Mr Murali Pillai, the People's Action Party (PAP) candidate for the Bukit Batok by-election.

His campaign manifesto came on the eve of Nomination Day - today - which will confirm the slate of candidates for the single-member constituency (SMC), whose 25,727 voters will go to the polls on May 7.

His main rival is set to be the Singapore Democratic Party (SDP) chief, Dr Chee Soon Juan, who announced last Friday four social initiatives that target a broad swathe of residents, from the young to the elderly.

Mr Murali, speaking at a media conference that was also attended by Deputy Prime Minister Tharman Shanmugaratnam, highlighted three areas he would champion if elected: jobs for Singaporeans, ease healthcare costs of the elderly, and improve social mobility.

To help unemployed residents find jobs faster, he said he would tap his network of community volunteers, a move that goes a step further than the Government's job placement programmes.

Citing how he helped a resident get a job interview the day after he was retrenched, Mr Murali said: "We cannot just sit in our offices and think the residents will come with their problems. We need to be out in the community talking to our residents." 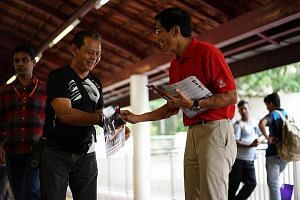 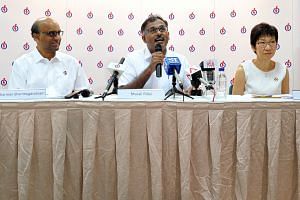 Residents will benefit from being part of a big town council: Tharman

To help the elderly, he would set up a health cooperative, where residents can buy items such as catheters and vitamins at a lower cost.

He also said he would build a pool of volunteers to mentor and inspire children in low-income families.

When asked about the timing of his announcement, he said Bukit Batok residents are familiar with the PAP's programmes, as the party has been running the area since 1972.

Mr Tharman, who leads the neighbouring Jurong GRC, said: "In Jurong, we have always kept a low profile. We keep our heads down and get the work done. The residents will judge us. Not everyone likes our strategy, but so far so good."

Mr Murali also noted that some of the SDP's plans already exist, like its proposal for a legal clinic staffed by seven lawyers. He had set up one such clinic in the SMC more than 15 years ago, he said.

Yesterday's plans are in addition to a $1.9 million infrastructure programme he unveiled last week, and 22 existing programmes run by the PAP, grassroots organisations and non-profit organisations.

Would these continue if he was not elected? That would "depend on the MP that the Bukit Batok residents choose", Mr Murali said.

Mr Tharman noted that like the PAP, some of the SDP's proposed programmes would be run by new volunteers who are not members of the party.

Noting that it puts both parties on a level playing field, he added: "But we've got something going here - a very strong volunteer base.''

Mr Murali also said he would urge the Government to give higher payouts from ElderShield, a national insurance scheme for those with severe disabilities. The current payout is up to $400 monthly.

As a lawyer, he said he would use his experience and work contacts to benefit his residents, as he had done when raising funds for bursary awards he set up in the SMC.

Some people have noted that Mr Murali's race could be a factor in the by-election as close to three-quarters of the voters are Chinese, near the national average.

His response: "I'm Indian but I'm Singaporean. And so far, I have had no difficulty in surmounting the language issue because I know a little bit of Mandarin.

"At the same time, I'm supported ably by my dedicated group of volunteers.''