SINGAPORE - To help workers reskill and upskill and keep up with industry transformation, Singapore's unions are working with businesses to set up Company Training Committees (CTCs). More than 50 such committees have been formed so far in three months.

National Trades Union Congress (NTUC) secretary-general Ng Chee Meng gave this update on Wednesday (June 12) in Geneva, Switzerland, as he spoke on how Singapore's labour movement is taking practical steps to realise the concept of "Worker 4.0".

A "Worker 4.0" is one who has a combination of adaptive, technology and technical skills, and can be more productive, increase value to businesses, and earn better wages, he said.

Delivering a plenary speech at the 108th International Labour Conference, he said the receptiveness by companies to set up CTCs has been encouraging, and the aim is to have 1,000 such committees in companies within three years.

He said the CTCs accelerate the acceptance of technology to benefit both businesses and workers. Through these committees, there is also a better understanding of companies' transformation plans and workers' training needs to acquire relevant technology skills, he added.

The NTUC is helping firms access government grants to adopt technology, with up to 80 per cent funding support, he said. 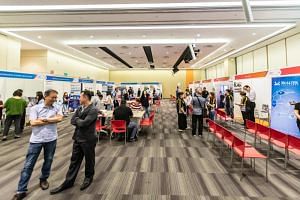 Technology can help to upskill workers, not render them obsolete: NTUC

Mr Ng said the Government recently announced changes to its Enterprise Development Grant scheme and companies must now commit to training workers and also sharing gains with them.

He said strong tripartism is key to the efforts to train workers for the future.

"With the support of our employers and Government, we can further reinvigorate our social contract and strengthen our social dialogue further to bring the future of work into reality today and turn it into a strategic advantage for a small country like Singapore," he said.