The National Trades Union Congress (NTUC) has taken steps to set up "training committees" that identify the types of training and skills workers will need to keep up with the transformation of the industries they are in.

Its secretary-general Ng Chee Meng said NTUC has worked with about 10 companies in a pilot project to set up these committees, which comprise management staff and union leaders, to help nurture what he termed as "Worker 4.0".

"For Industry 4.0 to be actualised, we need our workers to transform in parallel with their companies and industries because there can be no Industry 4.0 without the worker," Mr Ng said yesterday, the first day of the debate on the Budget statement.

NTUC is working with companies in sectors ranging from port engineering to aviation, including SIA Engineering as well as in-flight catering service provider Sats.

Together with NTUC, companies are working out future versions or archetypes of their employees, and hence the skills gap and training required for their present workforce.

"Our intention is to help our workers visualise the potential of Industry 4.0 for their companies, and for... their careers," he added.

The partnerships cover about 64,000 workers and the plan is to expand the collaboration to all of NTUC's unionised companies. 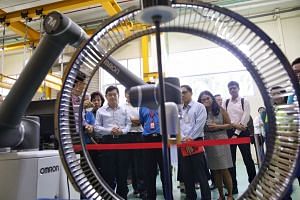 He gave the example of PSA senior mechanical engineer Ng Hwee Sheng, who took on a larger role managing automated and intelligent systems at the port operator after completing a year-long systems engineering course at the Singapore Institute of Technology (SIT).

Mr Ng said that with examples of workers who have moved towards Worker 4.0, the hope is that more will do so and take personal responsibility in upgrading their skills.

He suggested that the training committees can chart skills and competency requirements, put in place training programmes such as PSA's one-year systems engineering course at SIT, and schedule worker training to minimise downtime on ongoing operations.

He also pledged that NTUC will do its best to support workers who feel displaced by rapid changes.

Mr Ng was among several MPs who gave suggestions and updates on how workers can be supported.

Senior Minister of State for Trade and Industry Koh Poh Koon, who is NTUC's deputy secretary-general, said firms need to have better training for older workers to improve their skills in using technology. He said NTUC will work with unions, industry partners, government agencies and institutes of higher learning to simplify the training space.

"It is timely to scale these efforts on a national level and extend the PWM to lower-wage PMETs to provide for their progression and upward labour mobility," he said.

There could also be differentiated insurance premiums for companies, with those who face many claims for similar incidents paying higher premiums, he added.