SINGAPORE - The National Solidarity Party's (NSP) on-again, off-again, on-again bid to contest MacPherson SMC in the coming polls took another surprising twist early on Sunday when council member Steve Chia put up a Facebook post declaring that he was no longer contesting the seat.

The abrupt U-turn, the second by NSP this week, appears to stem from online criticism Mr Chia received since he pushed for the party to renege on its deal to avoid a three-cornered fight with the Workers' Party (WP) and the People's Action Party (PAP) by steering clear of the ward.

"The Trolls have won," he wrote in a Facebook post put up at around 1am. "With this notice I am announcing that I will not be standing for this coming #GE2015 and will not be contesting in #MacPhersonSMC anymore."

He added: "It is with anguish and deep sadness that my lifelong ambition to be the people's spokesman in Parliament ends today."

Mr Chia, a former Non-Constituency MP, included a link to a website that purports to present a profile of him, and includes details about a nude photo scandal he was embroiled in in 2003.

"The site is not set up by me. And some facts in it is not correctly written," he said.

In withdrawing, he wished the WP all the best in the polls, urging them to "take down" incumbent PAP MP Tin Pei Ling. 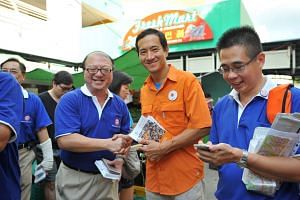 The announcement may finally bring to a close one of the more peculiar sagas in Singapore's political scene. On Aug 10, the NSP had said in a statement that it would not contest MacPherson and Marine Parade GRC to avoid an overlap with WP.

Last Wednesday, however, it said it changed its mind after receiving "feedback and pledges of support" from residents in the constituency it contested in 2011.

The change was apparently opposed by then NSP acting secretary-general Hazel Poa, who promptly announced her resignation from the party.

Then came Mr Chia's Facebook post - a withdrawal that was released before he was even announced officially as the candidate.

He wrote: "Just because NSP decided to contest against WP and PAP in MacPherson, it doesn't mean that people can use such smear tactics. Let them have a clean fight and that is what first world democracy is all about."