SINGAPORE - Cost of living is a multi-dimensional issue, and the measure of how prices change over time is but one aspect of it, said Minister for Trade and Industry Chan Chun Sing in Parliament on Tuesday (July 10).

The gap between people's aspirations and their ability to fulfil them can also bring cost-of-living pressures to people, he told the House, acknowledging people's concerns about the issue.

Pledging the Government's commitment to helping all Singaporeans manage and achieve their aspirations, he said: "We recognise Singaporeans' evolving aspirations for a better life for themselves and their families, and the associated stress of achieving real income growth in a volatile economic environment.

"Beyond creating opportunities for Singaporeans to enjoy real wage growth to meet their aspirations, the Government is also committed to help Singaporeans stretch their hard-earned dollar."

Mr Chan was responding to a question from Mr Liang Eng Hwa (Holland-Bukit Timah GRC), who had asked if the cost of living in Singapore has increased significantly.

The issue has gained traction in recent months as electricity tariffs went up and a previously announced increase in water prices kicked in.

Referring to charts which he distributed to MPs, Mr Chan said the overall inflation rate has been lower in the most recent five-year period - between 2012 and 2017 - compared with the corresponding period before.

The Consumer Price Index (CPI)-All Items inflation - or overall inflation - was at 0.6 per cent a year on average for the past five years.

Looking ahead, consumer prices could increase moderately alongside a faster pace of wage growth and improvements in the labour market, said Mr Chan.

Overall inflation is expected to remain low this year as well, between 0.5 per cent and 1 per cent, he added. But rising global oil prices are expected to increase fuel costs and electricity prices, he said.

But he said "no single measure will express an individual's 'cost of living' pressures fully, given the different needs and wants, the evolving aspirations and the potential gap between aspirations and anticipated means".

Mr Chan cited other factors that affect people's perceptions of living costs, including a changing interpretation of what essential goods and services are for different groups, and the increase in prices of items that are consumed daily - for example, water and transport fares - which may have a disproportionate psychological impact on consumers even if the increases are not the biggest in absolute terms.

"The 'bunching' of price increases, like the increases in water and electricity prices this month, can also have a disproportionate psychological impact," he said.

Describing these as "pressure points", he outlined the Government's strategy to manage them: Keeping the economy competitive, managing the Singapore dollar, diversifying sources of supply for items from food and water to fuel, promoting competition to keep prices low, managing the cost of doing business, focusing on providing help for those with less, giving consumers more choices, and leveraging social enterprises. 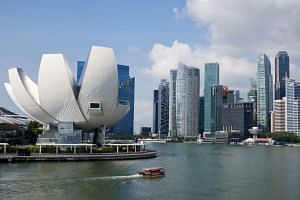 He added that the most important thing was to create good jobs for people, help them stretch their hard-earned dollar, and give most assistance to those who are the most needy.

The minister also said he understood that various groups of Singaporeans hoped for more help in the areas of education, housing, healthcare and transport, among other things.

He added that this was being done through indirect subsidies and means testing, so as to ensure that those with less receive the most help.

But while this was the economically and socially sound thing to do, he said, it does come with some challenges.

One is that consumers experience a "higher sticker price" when subsidies for prices of goods are not given upfront, which could create a negative psychological impact, he added.

Another, said Mr Chan, is that "it is always politically more difficult to carry the ground when different groups of people receive varying levels of assistance because they are assessed to have different needs".

"However, the alternative to give the same help to all without discrimination also cannot be the wisest way to expend our finite resources to help those who need more," he added.

"Ultimately, we must forge a social consensus on how much we want to tax the general public, to support the desired groups in a targeted manner."