SINGAPORE - There is no need for new legislation to deal with deliberate online falsehoods, said activists, who instead urged the Government to allow the public greater access to information and ramp up efforts to boost media literacy.

This was the call made in written submissions from various civil society representatives, who appeared before the Select Committee on deliberate online falsehoods on Tuesday (March 27).

Human rights group Maruah said the Government has not presented convincing evidence that the issue of online fabrications is a significantly new or different threat from that already addressed by existing laws.

"Existing laws can already be used and have been used against (deliberate online falsehoods) in Singapore and overseas. There is a very high risk that any legislative action will stifle free speech and may be used against the legitimate expression of dissenting views," it said in its written submission.

Maruah, represented by vice-president Ngiam Shih Tung, cited the case against the editors of now-defunct sociopolitical site The Real Singapore, who were convicted under the Sedition Act in 2016 for deliberately sowing discord between Singaporeans and foreigners.

This showed that pre-Internet era laws can be successfully used against online offences - and even against people based outside Singapore, said Maruah.

And in the event that new laws are enacted, the group said, this must be balanced and not result in the removal of legitimate content, including political debate.

"All parties affected must be given the chance to present their case and take-down orders (should be ) issued only by a court of law," it added.

They had all argued in their written submissions that existing laws are sufficient to deal with online falsehoods. The Telecommunications Act, for instance, covers falsehoods transmitted electronically, while the Defamation Act covers slander.

Mr Xu said that countries cited in the Green Paper on online falsehoods which are introducing new laws are doing so because their existing laws "are very liberal compared with Singapore's wide generalised laws, which cover all aspects of free speech".

He also noted that regulations in place for those looking to dabble in creating online content through class licences given out by the Infocommunications Media Development Authority for certain sites. 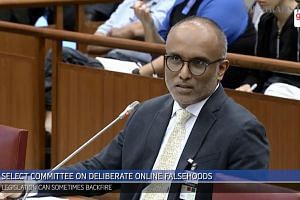 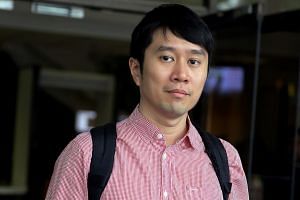 Mr Xu also suggested that the Newspaper and Printing Presses Act be revoked, in a move that he said could help restore public trust in the mainstream media.

"To combat falsehoods online or spread through social networks, legislation is not the way forward but a few steps back," he said.

"The best way is to allow citizens to gain access to more sources of information and for them to develop a questioning and critical mindset on what is true or false, whether the information is from official or independent sources," he added.

Mr Xu and other activists worried that new legislation could stifle freedom of expression.

Ms Han, who has written on Singapore for local and foreign publications, said the potential for virality on social media has led some to argue that existing laws do not allow the authorities to act swiftly enough to counter the speed with which fake news might spread.

"However, we should be careful not to trade important principles of justice and due process for speed," she said in her submission. "Hasty measures carry the danger of according too much power to the authorities, at the expense of freedom of expression and open debate in Singapore, thus undermining the 'vigorous exchange' the Green Paper has highlighted as crucial to shaping the nation's path."

Media literacy will be a crucial weapon in the fight against fake news, she noted, adding that critical and media literacy education should start from a young age, and that there should be comprehensive political education as well.

And citizens should also be able to use the media to participate in open debate, said Ms Han, who felt that this has not yet been fully addressed.

Both Ms Han and Mr Xu called for a Freedom of Information Act that will allow the public greater access to information.

"Greater transparency and openness also comes with the benefit of building and strengthening public trust by demonstrating the Government's willingness to be held to account and communicate openly with its citizens," said Ms Han. An independent ombudsman to address complaints against the Government and public institutions could help too, she said.

The speakers also noted in their submissions the difficulty of defining what counts as an online falsehood.

Mr Lee, who used to write for The Online Citizen, said any decision on its definition should be made by a collective of independent individuals from the mainstream and online media, the legal profession, academia and civil society.

No distinction should be made between online and mainstream media sources, he added.

"All information sources made publicly available, including the more widely-circulated mainstream media, should be treated fairly and equally," said Mr Lee. "If technology is to be considered a factor at all, the ability of online media to issue quick corrections and provide links to clarification should be taken into consideration and hence warrant that they be dealt with more favourably."

And attention should be paid to misinformation that can cause "real harm to helpless individuals", such as hate-mongering and online scams, rather than "vague concerns about 'political manipulation'," he added.