SINGAPORE - Four years after she became the talk of Marine Parade GRC, where she stood as the youngest candidate in the 2011 General Election, Ms Nicole Seah has set tongues wagging again.

This time, with a seeming show of support for the Workers' Party (WP) on her Facebook page.

A post on Tuesday linking an article on Ms He Ting Ru, 32, who is contesting as a WP candidate at the next polls, has sparked speculation over her political allegiance.

Twice, the former National Solidarity Party (NSP) member, who has been working in Bangkok, told netizens hoping to see her return to the fray in Marine Parade GRC that she will be back in town to help out - but would not be running.

In one reply, Ms Seah, now 28, said: "I will definitely come back to help! Just not as a candidate."

This reawakens curiosity about her plans, and comes weeks after she made it clear she would not be rejoining the NSP, despite its efforts to woo her back. She had said: "I'm not rejoining NSP, and will not run for elections this time around."

Ms Seah took a leave of absence from the NSP in 2013 and quit the party last year. But exchanges on her Facebook page seem to suggest her loyalties now lie with the WP. 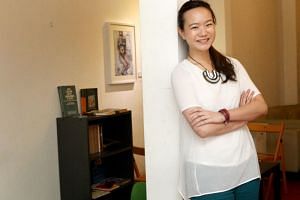 A netizen who told her that "who knows, you may join the WP one day too" received a cheeky wink emoticon from Ms Seah, who said: "Who knows?"

She was also ready to heap praise on the WP, as she responded to a comment on whether she would be able to stand in the coming polls if she joined the party now.

"What I appreciate about WP is that they have very clear processes for candidacy and membership," said Ms Seah. "There is no fast track or parachuting. So, Ting Ru has really gotten to this point because of her hard work helping at the legal and grassroots level."