SINGAPORE - At the next general election, Singaporeans will have to identify and support a team that they feel will be able to move the country forward, said Prime Minister Lee Hsien Loong.

He was commenting on the significance of the polls which will have to be held by April 2021, at a dialogue during the Business China Awards gala dinner on Friday (June 7).

"I think it's to show ourselves and show the world that Singapore is united and we understand what our safety, security and prosperity depends on, and are able to identify and support a team to help us move forward and get to where we want to be," Mr Lee said.

This is especially so for the upcoming election as the country is preparing for a leadership transition, he said in response to Business China director Robin Hu, who moderated the 45-minute dialogue.

"It is crucial that the leadership transition works well. To say it works smoothly and without any glitch is asking a lot. But that it must work well and I must be able to hand over and the next team would be able to take charge and make Singapore work in their own way as I and my team were able to take over and make Singapore work in our own way, I think that is absolutely crucial for Singapore," he added.

Mr Lee has said he hopes to hand over to his successor by the time he turns 70, which is in 2022.

Asked for his observation of the fourth generation leadership team, Mr Lee noted that they have chosen Deputy Prime Minister Heng Swee Keat as their leader, to be supported by Trade and Industry Minister Chan Chun Sing as Mr Heng's deputy.

He said he was leaving more and more things to them - speeches, responsibilities and the handling of delicate issues. 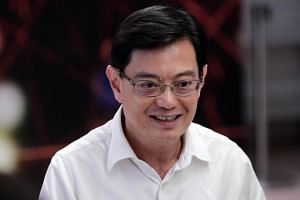 "I think they will gain experience and confidence of the people as they go along," Mr Lee said.

PM Lee added that he was very happy that things had progressed to this stage, but that there was still a way to go.

He highlighted the need to continue reinforcing the team, because "you must look for the people beyond (the 4G team) already".

That prompted Mr Hu to remark that the People's Action Party (PAP) must be in the midst of interviewing candidates for the next GE.

In response, Mr Lee said he has personally interviewed "quite a number" of potential candidates who have come before the Secretary-General's committee - the final panel which makes the decision before it goes to the party's top central executive committee.

These potential candidates cover a wide range of people of different races, age groups and backgrounds, he said, with both those from the traditional paths and those from more unconventional backgrounds, as well as a good number of women and young people.

Quite a number have been active in the grassroots or non-governmental organisations (NGOs), with passions which they have pursued, Mr Lee added.

He also said the party is still looking for candidates with the potential to be ministers, or even more than ministers.

"And there we are working very hard but we still have to get a few more," Mr Lee added.

Elaborating on those from unconventional backgrounds, he said they include those who may not have done well in school but had gone on to have careers in NGOs and had spent time overseas.

Q18: When is the next General Election? (Business China Awards 2019)

"You must wait till we unveil them," he quipped to laughter from the audience at the Sands Expo and Convention Centre at Marina Bay Sands.

On when the next general election will be called, PM Lee replied that going by past experience, there have been general elections called less than four years into the term, and some called beyond the five-year mark.

Q19: What is the significance of the next election? (Business China Awards 2019)

"So it could be anything in between. And if we haven't started getting excited then either it's not about to come or we haven't heard the news yet," he said.

He added: "We are preparing for the elections."