"I fed the swans some green beans. That was cool," he said. "Oh, and I also met the President. I saw her photos in school, but I got to talk to her today, and show her my drawing."

Dylan's visit was made possible by the new Picnic@Istana series, part of President Halimah Yacob's push to make the Istana grounds more accessible for Singaporeans.

Dylan was among more than 30 children from the Dyslexia Association of Singapore invited by Madam Halimah to Friday's picnic.

They had light refreshments on the lawn, painted and coloured with School of the Arts students, and learnt more about the pair of mute swans, which the late Mr and Mrs Lee Kuan Yew would visit and feed during their evening walks.

Madam Halimah told reporters: "The Istana has a very special place in the hearts of many Singaporeans, because I think many people grew up with memories and stories about the Istana. And that is as it should be because this is part of our heritage, our history. It is a symbol of our independence, our sovereignty." 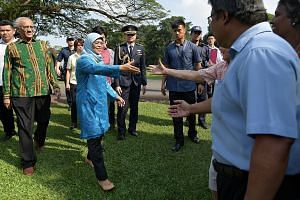 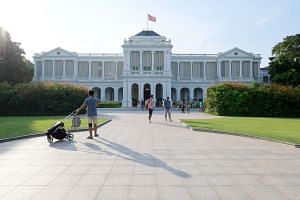 Once upon a glorious time at the Istana

The Istana now holds open houses five times a year, during Chinese New Year, Hari Raya Aidilfitri, Deepavali, Labour Day and National Day, but Madam Halimah said she felt it should be more accessible. Noting how the National Parks Board used the Istana grounds as a "test bed" to experiment with plants potentially suitable for Singapore, and how some trees on the sprawling grounds off Orchard Road are more than a hundred years old, Madam Halimah added: "I really hope that making the Istana grounds more accessible to Singaporeans will also develop their sense of pride, identity, and sense of belonging as a Singaporean."

Besides the Picnic@Istana series, which will see four picnics held a year, there are plans for other activities, she said. These are still being formalised.

Dyslexia Association of Singapore head of publicity and publications Deborah Hewes, who was meeting the President for the first time as well, said of Madam Halimah: "She's been going out there, reaching out to a range of groups. And while she's interacting with special needs students, those with dyslexia haven't been discounted - which they sometimes are, because their disability is seen as invisible or hidden. They look normal, even though they're struggling with learning. I'm grateful she's made some time for us, to tell us she's paying attention to us too, and invited us to the Istana."