Previously, some NSFs did their BMT at the camps of selected combat units, in what is commonly known as the mono-intake system.

The change means that, for example, a serviceman enlisted into the 3rd Battalion, Singapore Infantry Regiment (3 SIR) will no longer do his BMT where the unit is located, at Selarang Camp in Loyang.

Instead, he will attend a common nine-week course on Pulau Tekong. This move is aimed at strengthening both unit identity and the common national service experience.

Recruits at the BMTC selected to be part of a unit, such as those from the infantry, armour and Guards formations, will also stand a higher chance of being posted back there if they attend command school after their basic training.

"These NSFs will benefit from BMTC's dedicated training experience, infrastructure and use of technology. Most importantly, they will share a common experience, within the unit, and within the SAF tribe," Mr Ong said during the debate on Mindef's spending plans.

The Straits Times understands this change exempts NSFs enlisted as commandos and naval divers, and those in support vocations. The future capability and effectiveness of the SAF will not be based on the number and quantity of people we have, but their quality and ability. 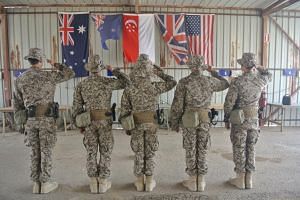 The One-BMT programme was fully implemented last November. More than 2,500 NSFs have done it since a trial began in August 2016.

This change is one of a number to tackle key challenges to national service, which was the focus of Mr Ong's speech, and "remains the bedrock of the strong and credible SAF that we have today", he said.

One challenge is a demographic one, due to falling cohort sizes and the shrinking enlistment pool. Another is the "evolving new unconventional security threats" such as terrorism, cyber attacks and disinformation campaigns, he added. "The future capability and effectiveness of the SAF will not be based on the number and quantity of people we have, but their quality and ability."

One way to achieve this is through a review of vocation requirements, a solution enabled by technology.

"So many more servicemen can now perform what could have been done by servicemen who met the most stringent physical requirements in the past," Mr Ong said. He gave the example of a serviceman operating an autonomous system in a control room being in combat, even though he is not doing something physically demanding.

He revealed that since last year, the SAF has deployed more than 600 servicemen to vocations they were previously ineligible for. Another 1,500 are expected to be deployed to more vocations this year.

Second Sergeant K. Dinessh Raaj, 22, is part of the first unit to have embarked on the One-BMT programme. He was given a 6 Division formation patch and physical training singlet when, on his arrival at BMTC, he was told he had been posted to the 3 SIR unit.

"It drove me further to do my best in command school to return to the unit, and take care of them throughout the two-year full-time NS, and also for the 10 years (of reservist duty) after that," he said.

Budget 2018 and debate on ministries’ budgets

A version of this article appeared in the print edition of The Straits Times on March 03, 2018, with the headline 'Nearly all combat-fit NSFs to do basic training together'. Subscribe
Topics:
More
Whatsapp Linkedin FB Messenger Telegram Reddit WeChat Pinterest Print Purchase Article Copy permalink