SINGAPORE - Prime Minister Lee Hsien Loong drew a standing ovation on Sunday (Aug 21) night from the audience when he resumed his National Day Rally speech after a scare in which he was taken unwell while addressing the nation.

Nearly three hours into his speech at about 9.20pm, he suddenly paused, faltered and appeared unable to continue. Three ministers and his security officers rushed up on stage to help him as the audience looked on in worry and confusion.

A medical team later assessed that Mr Lee's condition was "not serious" and he returned to finish his speech after resting for an hour.

The Prime Minister's Office said he was feeling unsteady because of prolonged standing, heat and dehydration. His heart is fine and he did not have a stroke.

Showing flashes of humour, Mr Lee thanked the audience for waiting for him when he resumed the speech at 10.40pm.

"I've never had so many doctors look at me all at once. They think I'm all right but anyway I'm going to have a full check-up after this. But before that I'd like to finish my speech."

The rally is the year's biggest political platform, where Mr Lee traditionally spends the better part of three hours mapping out the Government's plans for Singapore.

On Sunday, in marked contrast to last year's celebratory SG50 Rally, he sketched out the threats and challenges facing Singapore as it turns 51.

But he painted an upbeat portrait of the future, saying that although Singapore will be tested from time to time, he was confident the country would succeed as long as Singaporeans held fast to the tenet of unity, established since the nation's founding days.

In a speech that was both serious and hopeful, he said: "We are a people building on the work of each generation, looking to the future with confidence... With this spirit, Singapore will advance in our nation-building journey."

Singapore once again at threshold

Sunday's rally is the first since last year's Golden Jubilee celebration. Speaking in Malay, Mandarin and English, Mr Lee said the country was once again at the threshold, looking ahead to the next phase of nation-building.

He added that it was his responsibility to speak candidly and seriously about what lies ahead, even if the subjects were not typical in such rallies and "will not all be easy or fun".

"I am sharing my concerns and my plans with you, because all of us have a role to play, building Singapore together," he said.

To the 1,400-strong audience at ITE College Central, he said the disruption to businesses and workers, caused by technology and globalisation, would be a defining economic challenge.

He acknowledged that small and medium enterprises have found it tough to adapt to the relentless changes, and pledged the Government's help through the Committee of the Future Economy and other agencies.

Giving examples of several local companies that have managed to thrive in the new environment, he urged them to stick out the rough patch, promising that there would be opportunity in crisis.

Securing Singapore's place in the world

As a small country in a volatile region, and one where the terrorism threat has been growing, Singapore also had to contend with its geopolitical realities and security.

Mr Lee said it would be challenging securing Singapore's place in the world, and told Singaporeans it was crucial that they understand the country's national interest and support its relations with other countries. 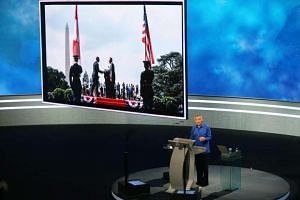 Terrorism threats, both external and domestic, added to this challenging situation, he said, recounting the recent arrests of Singaporeans radicalised by jihadist propaganda.

Whether society would survive a terror attack or be torn apart boils down to "our collective resolve to stand with each other", he said.

In this respect, Singapore was in a good place as religious and community leaders here had taken a courageous stand by condemning terror attacks and refuting extremist views, said Mr Lee.

He singled out Muslim leaders for praise, saying that they understood the importance of practising their faith in the context of Singapore's multi-racialism. He noted that the leaders had pushed for a scheme that certifies religious leaders to be made mandatory.

Moving on to the subject of good politics, Mr Lee said key to ensuring Singapore's stability is making sure that the political system does not malfunction.

He said: "Our politics must unite the country and uphold our multiracial society."

He announced that the elected presidency will be tweaked to ensure that a minority president is elected to the highest office of the land from time to time.

Revealing that the Government has accepted the recommendations made by the Constitutional Commission set up to review the institution, he said: "We want a minority Singaporean regularly to become President, to represent what we feel about Singapore, and our ideal of a multiracial society."

Still on topic of good politics, Mr Lee expressed relief that he had managed to reinforce his team in the General Election last year and would continue to do so at the next polls.

He joked that the issue of succession was all the more important in light of what happened to him earlier in the night.

Underpinning the different subjects in Mr Lee's speech last night was the theme of unity.

If society stays cohesive and Singaporeans stick together in tough times, they would be able to overcome the economic challenges and terrorist threats, he said.

In fact, they had done it before, when the country faced similar challenges 15 years ago, he noted.

Then, after the Sept 11 terror attacks in New York in 2001, the world was in shock and Singapore's economy had gone into recession. Singaporeans had given the Government a strong mandate at the General Election held in November that year, allowing it to carry out its plans for the country, said Mr Lee.

He cited the Marina Barrage and Gardens by the Bay in the Marina Bay area, and the housing estates in Punggol, as examples of how much the country has changed since then.

Plans are already in place to transform the western and eastern parts of Singapore in the next 15 years, he said, with an eye on the future.

Wrapping up his English speech, he said: "Can things get better after SG50? Can the best be yet to come? The answer is a resounding yes!"

What would keep Singapore going, would be a "divine discontent", said Mr Lee.

"What I would like to have is that we be blessed with a divine discontent. Always not quite satisfied with what we have, always driven to do better," he said.

"At the same time that we have the wisdom to count our blessings, so that we know how precious Singapore is, and we know how to enjoy it and to protect it."