Jobs and the economic impact of the Covid-19 pandemic are set to dominate the week-long parliamentary debate on the President's Address that starts on Monday.

The debate will see MPs discussing the issues raised in the speech and scrutinising the plans of the various ministries set out in the Addenda to the President's Address released this week.

In her address laying out the Government's plans and priorities for its new term of office, President Halimah Yacob said jobs will remain the top priority for the next few years.

MPs have indicated that concerns over jobs are foremost on their residents' minds as well.

Mr Patrick Tay (Pioneer) will be the first MP to speak and also round up the debate at the end of the week. The labour MP plans to speak on strengthening the Singaporean core in the local workforce and on professionals, managers and executives (PMEs).

He said his speech will give an indication of what he plans to focus on at a new task force under the National Trades Union Congress that he is jointly leading, to champion the protection of local PMEs.

"The terms of reference and the scope of the task force are still being worked out, but one key area of focus would be supporting mid-career PMEs," he told The Straits Times. "This could be through strengthening the Singaporean core and enabling this group to stay employed and employable."

Mr Desmond Choo (Tampines GRC) said he will speak primarily on support for graduates entering the job market between last year and 2021. "They face a very uncertain future. The effects will last five to eight years and we will need to support this generation very differently," he added.

He also plans to speak on selfemployed persons, ask for extensions to support measures and call on platform companies to undertake greater responsibilities.

Workers' Party (WP) MP He Ting Ru (Sengkang GRC) said that in addition to issues relating to jobs, she also plans to speak on sustainability and support for families in her maiden speech.

Mr Louis Ng (Nee Soon GRC) said he will continue to focus on the importance of building a caring and compassionate society, which was the theme of his maiden speech in 2016. Some of the topics he will touch on include making workplaces more inclusive for women and mothers and making schools more inclusive for special needs children. 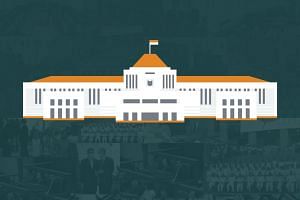 Singapore’s 14th Parliament: Get to know your MPs

On Monday, several administrative matters will also be settled in Parliament.

Home Affairs and Law Minister K. Shanmugam (Nee Soon GRC) and Ms Joan Pereira (Tanjong Pagar GRC) will take their oaths of allegiance during the sitting. They were not present when the other 91 MPs and two Non-Constituency MPs were sworn in earlier this week when Parliament reopened.

Leader of the House Indranee Rajah will deliver a Ministerial Statement on the duties and privileges of the Leader of the Opposition (LO) before the debate on the President's Address begins.

The LO is a newly established post held by WP chief Pritam Singh.

The Committee of Selection will also be appointed on Monday. It is chaired by Speaker Tan Chuan-Jin and is responsible for selecting MPs for Parliament's various other Select Committees.