He suggested that the Ministry of Manpower (MOM) consider expanding the list, which would provide an avenue for employees to claim compensation for such issues, or at least initiate more studies on the effect of workplace mental health issues.

"Mental health issues arising from work are a real and an ever-present danger at the workplace," he said yesterday.

"We can (quibble) about how to label such mental health issues - whether it is an occupational phenomenon or a work-related disease. What is clear, however, is that we need to protect our workers who may be suffering in silence."

He was among several MPs who raised the issue of coverage for mental illnesses during the debate on the Work Injury Compensation Bill.

Minister of State for Manpower Zaqy Mohamad said mental illnesses are covered under the Work Injury Compensation Act as long as they are linked to a work accident. 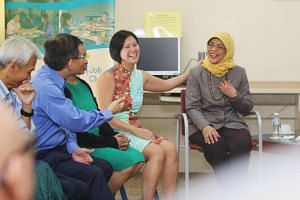 Employers should offer more 'quality jobs' to those with mental health issues: Halimah

Speaking up about mental health at work reduces stigma, but at a cost

Many in Singapore unwilling to live or work with people with mental health conditions: Survey

He added that in the past five years, three cases of psychological injury arising from work-related accidents were compensated under the Act. All were related to post-traumatic stress disorder (PTSD).

A total of 13 MPs spoke in support of the Bill, though they raised concerns as well.

Mr Foo, who is president of the Singapore Manufacturing Federation and chairman of Sakae Holdings, said standardised insurance coverage, the taking over of all claims processing by insurers and the higher compensation limits may increase insurance premiums.

"Employers will need to factor this increase into their total business cost. This is especially important in the context of today's challenging business climate," he said.

Mr Zaqy said the work injury compensation insurance market is competitive with 31 insurers operating, so it will be difficult for any insurer to unilaterally raise premiums.

Average premiums paid per employee insured declined 12 per cent from 2015 to last year despite compensation limits being raised by 20 per cent in January 2016, he said.

The vast majority of companies already insure all their employees even though they do not need to do so, and only around 25,000 to 30,000 more employees will need to be covered, so companies would not face significantly higher premium costs as a result of the expanded coverage, he added.

MPs also raised the issue of coverage for self-employed people, and called for more efforts in educating workers - especially low-wage foreign workers - about their rights to compensation.