SINGAPORE - Parliament passed a law on Monday (Aug 5) that will give the civil defence powers to order building owners to improve fire safety measures that will ensure the safety of the public.

But during the debate, many members of the House also urged the authorities to make it compulsory to install fire alarms in Housing Board flats.

The suggestions came from at least seven of the 14 MPs who spoke on the Fire Safety (Amendment) Bill.

Some also wanted the Government to foot the bill or subsidise the costs.

Most of the MPs took the opportunity to thank SCDF officers for fighting fires and saving lives.

While Singapore's fire fatality rate is low at 0.07 fatalities per 100,000 population in 2018 - compared to, say, Tokyo's, which was nine times higher  - a recent spate of fires in residences, caused by charging personal mobility devices (PMDs), led the MPs to highlight the need to secure people's home.

Presenting the Bill for debate, Senior Parliamentary Secretary for Home Affairs Sun Xueling said the Singapore Civil Defence Force has identified about 500 mostly commercial, industrial and government buildings that will have to make critical safety upgrades that meet the latest Fire Code.

Most MPs, including Mr Louis Ng (Nee Soon GRC), supported the new law but several also questioned why fire alarms are not a must in HDB flats.

Said Mr Ng: "If we agree that having a fire alarm system saves lives, why do we not have it for our HDB flats? 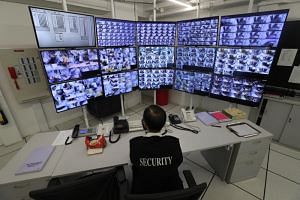 "It seems even stranger that we have fire alarm systems in our HDB multi-storey carparks where nobody lives and not in our HDB flats where hundreds of people live in."

He estimated it would cost the Government about $160 million to install alarms in existing flats.

Non-Constituency MP Daniel Goh, citing a fire involving a PMD in an Ang Mo Kio flat last month, said a smoke detector may have alerted neighbours early so that they could leave.

Four people in a neighbouring flat had to be rescued by firemen.

Replying to the suggestions, Ms Sun said the Home Affairs Ministry and SCDF had deliberated  introducing such fire safety measures, and will continue to assess the necessity of these measures. They will also keep in mind the potential cost impact on home owners, should these be mandatory

Pointing to PMDs as the cause of many of the recent home fires, she said the problem will be addressed with the earlier deadline for PMDs to comply with electrical safety standards. It has been brought forward by six months, to July 1, 2020.

She also noted that the number of home fires has fallen about 14.5 per cent in the past three years.

Referring to an exercise to install fire alarms in 60,000 public rental flats for free, Ms Sun said the Government would look at whether it should expand the scheme.

Another key change to the law allows the SCDF to outsource routine inspections and enforcement to authorised third parties, such as auxiliary officers as well as retired SCDF and police officers.

Ms Jessica Tan (East Coast GRC) and Ms Sylvia Lim (Aljunied GRC) said such checks require SCDF officers to be on the ground, which would allow them to assess first-hand the fire safety condition of buildings.

"I do hope that there will be a balance of using authorised third-parties for these tasks and still having SCDF officers stay connected with the ground conditions and insights," said Ms Tan.

Ms Sun replied that the SCDF plans to start with a small team of around five such officers, who will do simple checks like whether there are obstructions to escape routes or faulty emergency lights.

The SCDF carries out about 2,000 such inspections a year, and outsourcing these simpler tasks would allow its officers to focus more on higher risk areas, she added.

Ms Sun assured the House that SCDF officers will continue to be close to the ground.