SINGAPORE - There were about 50 cases last year of workers complaining they were denied entitlements like overtime pay, because their employer had classified them as a manager or executive, the Ministry of Manpower (MOM) said on Monday.

Of these, 90 per cent had evidence to back the complaints, it added.

"The MOM takes a serious view of attempts to misclassify employees in order to avoid employer obligations," a spokesman said in a statement.

It, however, added that the incidence of such misclassification has been consistently low compared to other complaints.

The 50 cases make up less than 1 per cent of all cases received by the Tripartite Alliance for Dispute Management (TADM).

Under the Employment Act, workers earning below $2,500 are entitled to benefits like overtime pay, unless they are classified as managers or executives.

It is a situation labour MP Patrick Tay had highlighted in a blog post on June 21, saying some bosses inflate an employee's job title to avoid paying overtime to them.

He said an estimated 30,000 workers in Singapore are classified as professionals, managers and executives (PME's), but earn below $2,500 a month.

His post led The Straits Times readers to discuss the issue in the newspaper's Forum Page, with one criticising the practice.

The MOM said that in handling such cases of inflated job titles, the TADM and the ministry are guided by the law as interpreted by the courts.

"In particular, the employee's job title is not a relevant factor. Rather, each case is assessed individually based on the specific scope of the job, such as the level of authority and decision-making powers in the management of business functions, recruitment, discipline, termination of employment and staff performance and reward."

The application of the existing law has thus been effective in providing a remedy for affected workers, the MOM added.

The ministry also pointed to a recent High Court case which found that a Bangladeshi worker deployed as a site supervisor was not an executive, and was entitled to pay rates for the rest days he worked.

This judgement "made clear that a person who holds a supervisory function is not automatically regarded an executive," the MOM said.

The court had taken into account the nature and level of supervisory powers in deciding that Bangladeshi Hasan Shofiqul was entitled to statutory overtime payments. 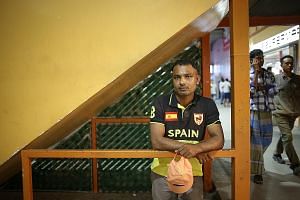 Where relevant, MOM and TADM will apply the guidance arising from this High Court judgement, the ministry said.

The MOM had said in March that it will amend the law later this year to extend the core protections in the Employment Act, such as protection against unfair dismissals and late payment of salaries, to every employee, regardless of their pay and whether they are in managerial or executive positions.

The existing Act covers only those who earn up to $4,500 a month.

But managers and executives will continue to be excluded from additional protections, like overtime pay, provided under Part IV of the Act.

This issue will be studied further in future reviews of the Act, the MOM said.

When contacted on Monday, Mr Tay told The Straits Times that although only 50 cases were reported to the ministry , most were substantiated.

He expressed the hope that the estimated 30,000 professionals PMEs who earn less than $2,500 a month will take a closer look at their employment contracts, job roles and responsibilities and see if they are indeed PMEs who need not be paid overtime.

"Likewise, employers need also be mindful not to wrongly classify their employees,'' he added.