Malaysian Prime Minister Mahathir Mohamad called on President Halimah Yacob at the Istana yesterday, after he was hosted to a welcome ceremony by Prime Minister Lee Hsien Loong.

Singapore's Ministry of Foreign Affairs (MFA) said in a statement that Madam Halimah and Tun Dr Mahathir affirmed the deep historical and people-to-people ties which form the foundation of Singapore-Malaysia relations, and welcomed continued, mutually beneficial cooperation between their countries.

Dr Mahathir and his wife also attended an orchid naming ceremony on the Istana grounds.

The dinner, which President Halimah also attended as its guest of honour, recognised outstanding businesses in the region that have shown significant progress in establishing and reinforcing their foothold across various industries. 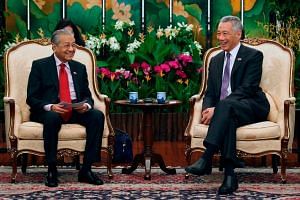 Dr Mahathir's alma mater, the National University of Singapore, will confer on him an Honorary Doctorate of Laws, MFA said.

The Malaysian Prime Minister will also attend the 33rd Asean Summit and related meetings from today until Thursday.

A version of this article appeared in the print edition of The Straits Times on November 13, 2018, with the headline 'Mahathir meets President Halimah; orchid named after him and his wife'. Subscribe
Topics:
More
Whatsapp Linkedin FB Messenger Telegram Reddit WeChat Pinterest Print Purchase Article Copy permalink