This is done through equitable policies on housing, healthcare and education, he says

Populism has become an issue in many countries, and Singapore has tried hard to guard itself against this by having a government which focuses on the basic needs of its people, Prime Minister Lee Hsien Loong said yesterday.

This is done through equitable policies on housing, healthcare and education, as well as ensuring Singaporeans have opportunities to upgrade themselves and cope with new demands, PM Lee noted.

"So, in many ways, we have tried to make sure that people have (their) basic needs met, aspirations (are) achievable and a sense that this is theirs. This is their country... they have every reason to be proud of it, they will defend the system."

If this is achieved and Singaporeans feel that the system works for them, they will not vote for a political team which will pull the system down, he said during the 19th Forbes Global CEO Conference at the Shangri-La Hotel.

He added that such a system calls for political leaders with conviction, commitment and a belief that they are doing this for a purpose, rather than to further their own careers and make a fortune, along with a civil service of high quality.

Populism has become an issue in many developed countries, because of a divide between the elite and the masses, he noted. The latter feel the system has not been fair to them, and they are left behind.

PM Lee was speaking during a dialogue moderated by Mr Steve Forbes, chairman and editor-in-chief of Forbes Media.

WORKING CLOSELY WITH OTHERS

We have a modest view of our place in the world. We are the smallest country in South-east Asia, apart from Brunei. We have solved some of the problems which we face in Singapore and found ways which work for ourselves...

We hope that what we have done here may be of some relevance to other countries, and if they may pick up some inspiration or some germ of an idea and develop it and use it in their own circumstances, we are happy for them.

I think for us to say that we will take the leadership role and we will marshal the other countries along would be very presumptuous and not very well received.

We try our best to contribute constructive ideas by which we can work together.

PRIME MINISTER LEE HSIEN LOONG, when asked if Singapore would take a leadership role in South-east Asia, in guiding the region's growth. 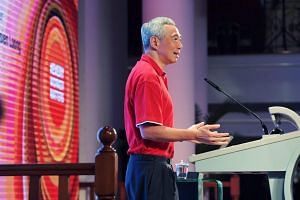 As industries undergo transition, workers will not be left to fend for themselves: PM Lee

During the hour-long dialogue, which covered a broad range of topics, including the US-China trade tensions, the political unrest in Hong Kong, and Singapore's role in South-east Asia, he was also asked how the Republic balances immigration and growth.

To secure the country's future, Singaporeans need to have more babies to maintain the core citizen population, he said, adding that the Government is working hard to promote marriage and parenthood.

The resident total fertility rate was 1.14 last year. PM Lee said if the rate can be pushed to 1.3 or 1.4, this is "two-thirds" of what Singapore needs, and the remaining third can be topped up with immigration.

"So, it is almost one to one; but of those permanent residents, we have about 20,000 who become citizens a year.

"So, we are producing more of our own kids than we are having immigrant new citizens. So, I think that is not a bad balance. If I can have a few more of my own kids, I think it would be better," he noted.

PM Lee said there is flexibility to have more or less, depending on the needs of the economy and the business cycles.

These non-resident workers bring vibrancy to Singapore and also contribute in various sectors, such as in the arts and culture, and business and economy, he said. At the same time, the Singaporean core and identity should be retained.

Mr Forbes also asked when the next elections will be held.

"Any time within the next 18 months. So, just keep your eyes peeled," PM Lee replied.

He reiterated that he will hand over the premiership "some time soon after the next election" to his successor, whom he hopes will have time to build up his team and build mutual trust and confidence with the population, to take the country forward and win the subsequent elections.

"I think it is very important to try to plan ahead and to arrange for orderly political succession," he added.

"So that whatever may happen to you personally, the country is assured of a leadership team which is competent, which is experienced, which is in touch with the population and in sync with the times and is in a position to take the country the next step forward with the next generation of Singaporeans."