This is an excerpt from Up Close With Lee Kuan Yew: Insights From Colleagues And Friends, a book on Singapore's founding prime minister.

After graduating, I went back to Kuala Lumpur where my father had a small law firm and was working for Tan Cheng Lock.

I travelled to Singapore a few times, hoping to get some lead work. I would meet up with Kuan Yew and he would take me out for lunch at a chicken rice stall in Middle Road. On my first visit, he asked where I was staying. I told him I was at the hotel next to the railway station. He said, "Oh, it's a terrible place! I have a spare room in the house." So I stayed with him a few times at Oxley Road. I think I slept in what would eventually become his daughter Wei Ling's room because she wasn't born then. He was very kind to me.

The first time I went to his home, his mother, who I had already heard was a very famous cook, insisted I stay for dinner. She cooked everything. I think I nearly burst myself that night. 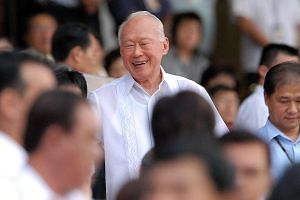 The Lee Kuan Yew they knew

When Kuan Yew won the elections in 1959 and became Prime Minister, I would meet him at his office at City Hall and we would go for lunch. Those were good times.

One of his favourite fruits was pomelo. Once, while enjoying some pomelo at his office, he told me it was from lpoh, specially brought in by Malayan Airways pilots. At the end of that visit, he called his secretary to ask how many of the fruit were left and asked her to put two in my car.

The last time I saw Kuan Yew was in late December 2014, at a dinner, together with a group of his friends. They always included me in these dinners, which were held every two months; they considered me to be his oldest friend, I guess, at least in age. Someone would organise a dinner for him. They would give the excuse that the poor chap was lonely, but actually all they wanted were his views. He knew everything!

MR LEE AS A CO-WORKER AND BOSS

There were a couple of occasions after graduation when Kuan Yew and I worked together on some legal cases. In one case, the richest man in Penang had insulted Dr Lim Chong Yew, a prominent politician and medical doctor. We worked on the case together for a short while until it was settled. We also did a few other small cases together. At that time, he was famous as a lawyer.

Clearly, he was brilliant. He was the most brilliant man I have ever met. If he was on a legal case, he would work through every detail and angle. When he set up the People's Action Party, he was absolutely thorough, in the same way he responded to questions at university or analysed cases. When we studied our cases, he always made sure he covered everything.

The very first time he came to Kuala Lumpur was in the early 1950s. We went for dinner at a restaurant in an amusement park in Bukit Bintang. We walked into a room that was empty but this newspaper chap, who was part of a wedding reception in the next room, noticed him and recognised him as Lee Kuan Yew from Singapore. He came up to Kuan Yew and asked him some questions, and soon, half of the wedding guests trooped over. I think Kuan Yew never ever liked any of this attention.

In 1982, when I was vice-chairman of OCBC Bank, I was seconded to the government to help restructure the Monetary Authority of Singapore. Eventually, I was appointed to head the Government of Singapore Investment Corporation. But I had to leave after a while.

What happened was that there had been a question asked in Parliament which was filed but not published. The issue was about Singapore money being transferred to a Malaysian. Dr Goh Keng Swee asked me, "Are you a Malaysian?" Indeed I was. So I was sent to see Lim Siong Guan, who was then principal private secretary to Kuan Yew, who then said I should become a Singapore citizen.

He would put up a paper with three names - Lee Kuan Yew, Hon Sui Sen and Goh Keng Swee - and also get them to sign it. I remember going to Empress Place to get this done. There was a nice lady there who gave me a book. I held it, took an oath, and so I became a citizen.

I then worked for Lim Kim San. I was in a room next to Dr Goh, who was at the Ministry of Education at the time; Kim San's office was across from Dr Goh's. I was actually on loan to Kim San because he was short of staff. He wanted someone to write letters for him - he said lawyers always wrote good letters - but he looked at me and said to Dr Goh: "I just don't like this bloody chap." Dr Goh dismissed it and told me Kim San was just in a bad mood that day.

The next time I saw Kim San, he was in a good mood and had forgotten we had ever met. I wrote simple letters for him; they were for his constituents or people requesting help from him, promising them that things would be done but that it would take time and we would do our best in the meantime. Kim San was very nice to me after that.

I had learnt to write very short letters, and the minutes I wrote while at the Government of Singapore Investment Corporation were also short. When I first gave the minutes to Kuan Yew, its new chairman, he said: "I don't like this. It's rubbish. I want to know exactly what each person said." He wanted more details.

In 1989, Kuan Yew was looking for a new Chief Justice and he said my name had been put up by several judges. He said, "Think about it," and told me to make a decision quickly.

I replied: "Can I think about it?"

He said: "That was what I said. But I hope your answer will be yes because you have done nothing for Singapore!"

He practically scolded me, bringing up the fact that I had declined his offer to be a Supreme Court judge in 1972.

He said there was no time to waste. I asked him what I was supposed to do. He said: "Become Chief Justice! Just clean up the whole thing, you know what to do."

I said: "Fair enough. But if the job is too much for me, will you release me?"

There was no answer.

The next thing I knew, he was telling people he had found a person and my name was published in the papers. So that was how I became Singapore's second Chief Justice.

A version of this article appeared in the print edition of The Sunday Times on March 20, 2016, with the headline 'THE LEE KUAN YEW THEY KNEW How I became Chief Justice'. Subscribe
Topics:
More
Whatsapp Linkedin FB Messenger Telegram Reddit WeChat Pinterest Print Purchase Article Copy permalink