SINGAPORE - A long-running question over what to do with the home of the late former prime minister Lee Kuan Yew at 38, Oxley Road has come into focus again after two of the late Mr Lee's children, Dr Lee Wei Ling and Mr Lee Hsien Yang, issued a statement on the matter on Wednesday (June 14).

In their statement, they reiterated their father's wish that the house be demolished upon his death.

The two siblings, who are joint executors and trustees of their father's estate, also said that their elder brother, Prime Minister Lee Hsien Loong, and his wife Ho Ching had opposed this wish as "the preservation of the house would enhance his political capital".

In April 2015, Dr Lee and Mr Lee Hsien Yang stated publicly that the late Mr Lee had asked for his house to be demolished after his death, and asked Singaporeans to respect this wish.

If demolition is made impossible owing to changes in the law, rules or regulations, it was the late Mr Lee's wish that the house should not be open to anyone except his children, their families and descendants.

There had been calls after Mr Lee Kuan Yew's death to turn the pre-war bungalow, which he had lived in since the 1940s, into a museum or heritage site. 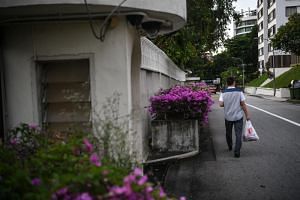 PM Lee told Parliament at a sitting on April 12, 2015, that Mr Lee Kuan Yew knew about calls from the public to turn his Oxley Road home into a museum and a memorial to him, but was adamant the house should be demolished after his death.

Mr Lee Kuan Yew had written formally to the Cabinet at least twice to put his wishes on the record, PM Lee told Parliament.

The first time was soon after his wife, Madam Kwa Geok Choo, died in October 2010, and the second time was after he stepped down from the Cabinet in May 2011.

In his statement delivered in Parliament, PM Lee said that his father's position on 38, Oxley Road was unwavering over the years, and added that Singaporeans should respect his wishes.

PM Lee explained that his father was averse to the idea as he had seen too many houses of famous people "kept frozen in time... as a monument with people tramping in and out", and they invariably "become shabby".

The prime minister also said that a decision on the fate of the house was not required as his sister, Dr Lee Wei Ling, continued to live there.

In December 2015, PM Lee and his two siblings said in a joint statement that they hoped the State would honour their late father's wishes regarding the house.

The statement also announced that PM Lee and Mr Lee Hsien Yang had each agreed to donate half the value of Mr Lee Kuan Yew's Oxley Road house to eight charities, in honour of their father.

"Dr Lee Wei Ling and Mr Lee Hsien Yang would like to honour the wish of the late Mr Lee Kuan Yew that the house at 38, Oxley Road be demolished after Dr Lee Wei Ling ceases to live in it," the statement said.

"Mr Lee Hsien Loong has recused himself from all government decisions involving 38, Oxley Road and, in his personal capacity, would also like to see this wish honoured," it added.

A online poll released later in December 2015 by Hong Kong-based market research firm YouGov found that a majority of those surveyed supported demolishing the house. Of the 1,000 people it polled online, 77 per cent said they backed Mr Lee's wish and 15 per cent of wanted the house preserved.