SINGAPORE - Historian Thum Ping Tjin has been accused of possible involvement in "a coordinated attempt, with foreign actors involved, to try to influence and subvert" Singapore's parliamentary processes.

"This is a serious matter," said Mr Charles Chong, chairman of the Select Committee on Deliberate Online Falsehoods, who laid out the evidence against Dr Thum in a three-page statement on Monday (April 30).

He said Dr Thum may have had a hand in crafting an open letter signed by academics worldwide as well as a statement from University of Oxford researchers.

The letter and the statement, which Mr Chong said were similarly worded, both defended Dr Thum after he was questioned for six hours last month during the hearings before the Select Committee.

Among the evidence Mr Chong cited were e-mails between University of Oxford academics that were inadvertently copied to the Parliament secretariat.

"We must protect our independence and the institution of Parliament," said Mr Chong, who added that the Oxford researchers "were being presumptuous in telling the Parliament of Singapore how to do its job".

The open letter was addressed to Mr Chong by 284 signatories worldwide voicing concern about a lack of academic freedom in Singapore. Some of the signatories were academics. It first appeared online earlier this month, and was formally sent to Mr Chong on Monday.

Among the signatories were Professor Prasenjit Duara, former director of the Asia Research Institute of the National University of Singapore (NUS); Associate Professor Lily Zubaidah Rahim of the University of Sydney; and media studies professor Cherian George of Hong Kong Baptist University.

Separately, a statement was published by seven trustees of the University of Oxford's Project Southeast Asia on April 16, addressed to the Select Committee. Mr Chong replied to the trustees on April 20.

The Parliament secretariat had been accidentally copied in a chain of e-mails involving the Oxford professors over the statement, in which a Dr Philip Kreager said he had kept in "continuous contact" with Dr Thum throughout the process.

Mr Chong released the e-mails on Monday, saying they "lift the curtain on what has been happening in secret".

In one e-mail dated April 22, Dr Kreager said: "(Dr Thum) has amongst other things suggested a draft reply for me, which I will turn to on return."

Dr Kreager then referred to a historical workshop he was attending, and added: "There will be a lot of historians from the meeting who will be signing the petition, and I am hopeful that several of them will be circulating our statement and the online letter for signature to their many colleagues here." 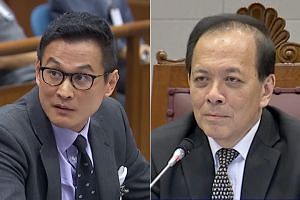 Thum Ping Tjin must expect to be questioned, says Charles Chong in response to open letter 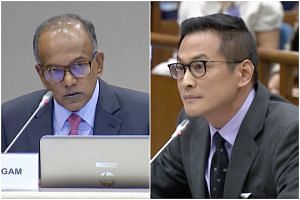 Mr Chong said the e-mail not only "strongly suggested" that Dr Thum was involved in both the statement and the letter, it also showed that Dr Kreager is "actively campaigning for Dr Thum", by circulating the Oxford statement by Project Southeast Asia and asking for signatures to the open letter.

Neither statements disclosed the close working relationship between the two, he added.

"They give an appearance of spontaneous academic support for Dr Thum in his battle against parliamentarians in an ex-colony," he said. "The 'support' seems to have been primarily engineered by Dr Thum himself, working in close concert with Dr Kreager."

Mr Chong also pointed out that Dr Kreager and Dr Thum are the only directors of a company called Observatory Southeast Asia UK (OSEA UK), which received money from entities linked to American billionaire George Soros and intended to set up a subsidiary to carry out political activities in Singapore. The Accounting and Corporate Regulatory Authority recently refused to register this subsidiary.

"Dr Kreager and Dr Thum are thus not mere academic colleagues," he said. "They are also business partners and fellow activists engaged in a political project directed at Singaporeans."

Mr Chong said Dr Kreager also appears to be Dr Thum's academic sponsor, as he chairs Project Southeast Asia, where Dr Thum is the coordinator. Dr Kreager is also the Director of the Fertility and Reproduction Studies Group at Oxford's School of Anthropology, where Dr Thum is a visiting scholar.

"It is not clear if those being asked to support the Project Southeast Asia Statement, and the Open Letter, know about the full extent of Dr Kreager's relationship with Dr Thum, or of Dr Thum's role in these documents," he said.

"There is also no evidence that they have been informed of what actually happened at the Select Committee hearings; the misstatements in these documents suggest that they have not."

On a separate note, Mr Chong said it is still not clear what Dr Thum's precise academic affiliation to Oxford University is. The Select Committee wrote to Dr Thum earlier this month seeking a clarification on his title.

"Dr Thum has given himself a bewildering variety of titles in his evidence to the Select Committee - from 'Research Fellow in History' to 'visiting professorship in anthropology' - almost all of which turned out to be inaccurate, non-existent or misleading," he said.

In an email reply to The Straits Times on Tuesday morning, Dr Kreager said that "any notion of a conspiracy on the part of Oxford Project Southeast Asia to 'subvert (Singapore's) parliamentary processes' is clearly preposterous".

He added: "Members of an organisation keep each other informed of events and exchange views. Historians, like other professionals, do likewise. The conspiracy that Mr Chong claims to have discovered in our private correspondence exists only in his own imagination."

The Straits Times has also reached out to Dr Thum for comment.