SINGAPORE - The new Parliament, which convenes on Jan 15, will witness several firsts, but its Speaker is expected to be a familiar face.

Madam Halimah Yacob, who became the first female Speaker when she assumed the role in January 2013, will be renominated by Prime Minister Lee Hsien Loong at the first sitting of Singapore's 13th Parliament since independence in 1965.

What exactly does the Speaker of Parliament do?

Here's a look at how the Speaker is elected, the responsibilities that come with the job and some notable names who have sat in the all-important chair.

1. What does the Speaker's job entail?

The Speaker presides over the sitting of the House and ensures parliamentary business and proceedings are conducted in an orderly manner. 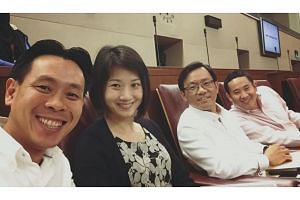 He or she also decides who has the right to speak and puts the question for the House to debate and vote on. The Speaker cannot take part in debates but is allowed to abstain or vote on a motion if he or she is a Member of Parliament (MP).

Should both the President and the chairman of the Council of Presidential Advisers be away, the Speaker assumes the duties of the President.

In terms of state protocol, the Speaker sits at the same level as the Chief Justice, the highest post in Singapore's judicial system.

Lastly, the Speaker represents the House in its relations with other Parliaments, welcomes visiting dignitaries and represents Parliament at national events and overseas official visits.

2. How did the role of Speaker come about?

The title of Speaker, traditionally the presiding officer of a legislative body, dates back to 1377 in England's House of Commons. The role was previously known as "parlour" or "prolocutor".

Up to the 17th century, being a Speaker was a perilous job as they more often than not served as agents to the King and were blamed for bearing bad news from Parliament. Seven Speakers were said to have been beheaded for this reason in the 15th century.

3. Who can be nominated as Speaker of Parliament?

The Speaker may or may not be an MP, but he or she cannot be a Minister or a parliamentary secretary.

Madam Halimah had to resign as Minister of State when she took on the post.

He or she must also possess the qualifications to stand for election as an MP provided for in the Constitution.

4. How is the Speaker elected?

Traditionally, the Prime Minister nominates a single person for the role.

The person's name is then proposed - and seconded - by MPs in the House at the start of a new Parliament before being elected as Speaker.

5. How many Speakers of Parliament have there been?

Veteran MP Charles Chong briefly took over as Acting Speaker when Madam Halimah's predecessor, Mr Palmer, stepped down in 2012 because of an extra-marital affair.

The Speaker is usually assisted by two deputies. Madam Halimah's deputies have yet to be named.

In the 12th Parliament, the Deputy Speakers were Mr Charles Chong and Mr Seah Kian Peng. Mr Seah has hinted that he would no longer be a deputy.

6. Who were some notable Speakers in the past?

Two of the nine Speakers - Singapore's first Speaker Sir George Oehlers (1955-1963) and Mr Punch Coomaraswamy (1966-1970) - were not MPs and were elected from outside of Parliament.

A third, Mr A.P. Rajah, was elected to Parliament (then known as the Legislative Assembly) as an independent candidate for Farrer Park in 1959. Although he lost his seat after the 1963 General Election, he was elected as Speaker the following year and carried on in the role post-independence till 1966.

The fifth Speaker, Dr Yeoh Ghim Seng, was Singapore's longest-serving as he presided over Parliament for nearly two decades (1970-1989). The former surgeon's appointment was also a break from tradition - all his predecessors were of legal background.

Dr Yeoh's successor, former MP Tan Soo Khoon, was known for his fiery and outspoken speeches when he was a backbencher. He stepped down in 2001 after 13 years as Speaker and remained an MP for another term.

PM Lee, paying tribute to Mr Tan after his retirement from politics in 2006, had said: "He makes very good speeches in Parliament. Sometimes, he draws blood. Sometimes he has offended ministers but he has spoken his mind."

7. Does the Speaker have any special privileges?

The Speaker is formally addressed in Parliament as "Mister Speaker" or "Madam Speaker".

The Speaker was also entitled to an official residence, but only Dr Yeoh lived in one - a stately colonial mansion on Kheam Hock Road, off Bukit Timah, known as Command House.

Mr Tan, however, declined to live there after taking over from Dr Yeoh in 1989.

It subsequently underwent restoration and served as the residence for then-President Ong Teng Cheong when the Istana was being renovated from 1996 to 1998.

It was rented out in 2007 to Swiss bank UBS, which still runs a business university there. Command House was gazetted as a national monument in November 2009.