It also helps people, businesses to plan ahead; those with less will get more assistance

Raising the goods and services tax (GST) rate is an unpopular move, and the Government could have waited for the general election to be over before announcing it. But that would not be the honest thing to do, said Deputy Prime Minister Heng Swee Keat.

Speaking at the People's Action Party (PAP) convention at the Singapore Expo yesterday, Mr Heng said many party activists had asked him not to talk about the move any more, as the elections are coming.

"But if I don't bring it up, the opposition parties definitely will - so it's better that you hear it directly from me," he added.

"The responsible thing to do is to be upfront, and tell the people that it will happen. This is what integrity means. We don't hide from difficult truths," he said.

Mr Heng, who is the PAP's first assistant secretary-general, said being upfront also helps people and businesses plan ahead for the hike in GST from 7 per cent to 9 per cent, which will take place some time between 2021 and 2025.

"You have my commitment that we will help Singaporeans cope with the change," he said.

The GST Voucher, a permanent scheme, will be enhanced when the tax rate goes up, he added, saying he will give more details of the GST support package in the coming Budget.

"More will be given to those with less, because this is fair," he said, adding that this is the first time the Government is announcing the GST support package in advance.

He also stressed that the GST support package is not an "election goodie", as it will be given only when the GST is increased during the next term of government.

Next GE will decide if Singapore can sustain a good, stable Govt: PM Lee

PAP must not allow split between masses and elite to take root: PM Lee

But the Government is aware that Singaporeans are concerned, given the current economic outlook, with Singapore narrowly avoiding a technical recession last quarter.

"We want to assure you that there will be help during the transition, so that Singaporeans need not worry or be riled up by the opposition who wants to find something to get people to be angry."

He urged activists to help explain this help to Singaporeans, and persuade them that a GST increase is necessary - to better care for seniors as they age and for children to fulfil their potential.

"Like generations before us, we are taking a bit of pain for the good of our children and generations to come," he said.

In his speech, Mr Heng outlined various measures that the PAP's fourth-generation leadership team has introduced to continue investing in and supporting Singaporeans, and create new opportunities.

In the realm of work, Manpower Minister Josephine Teo is equipping Singaporeans with the skills and confidence to pursue their career aspirations even in the face of setbacks. The retirement and re-employment ages are also being raised.

And to keep Singapore vibrant, connected and liveable, National Development Minister Lawrence Wong is developing new areas for work and play such as the Greater Southern Waterfront, while Minister-in-charge of the Smart Nation Initiative Vivian Balakrishnan is finding new ways for technology to transform the city. Environment and Water Resources Minister Masagos Zulkifli has embarked on zero-waste efforts and is promoting urban farming and renewable energy.

Said Mr Heng: "By investing in our people, growing our economy and rejuvenating our city, we bring new opportunities for our people to improve their lives."

But with changes and disruptions taking place so quickly, not everyone is able to keep pace. "The PAP will not leave anyone behind," Mr Heng said to applause.

He noted that in the last few years, social safety nets have been strengthened, with income ceilings for Build-To-Order flats raised and housing grants enhanced. 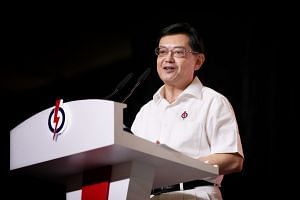 Reserved presidency a 'political minus' but right thing to do: PM Lee

"Our commitment to Singaporeans is that even as we create new opportunities, we will tackle inequality, so that no one will be shut out of opportunities, or left behind by progress," Mr Heng said.

"As long as you are willing and able to work hard, we will support you to make a better life for yourself and your family. This has been the PAP's promise to each generation."

The party also has a duty to future generations, he added, saying this is why, as a responsible government, it has to make sure there are enough resources to carry out its plans for Singaporeans long into the future.