In a statement, Mr Teo said he set up the commitee, which is "like numerous other committees that Cabinet may set up from time to time to consider specific issues".

Mr Teo noted that Prime Minister Lee Hsien Loong had recused himself from all government decisions to be taken on 38, Oxley Road after the late Mr Lee died at the age of 91 on March 23, 2015.

"I chair Cabinet should any deliberations take place on this property," he said.

Mr Teo's statement comes after Mr Lee Hsien Yang and Dr Lee Wei Ling made multiple statements criticising their brother, PM Lee, over the formation of a "secret committee" to look into options for the house.

The feud between PM Lee and his siblings began over the fate of the Oxley Road house, and spilled into the public sphere when Mr Lee Hsien Yang and Dr Lee issued a five-page statement on Wednesday, followed by numerous social media posts. 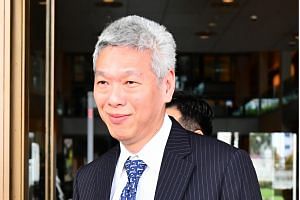 In a Facebook post on Friday, Mr Lee Hsien Yang had said: "It's evident from Loong's submissions that this secret committee is entirely uninterested in exploring options for the house, instead focusing solely on challenging the validity of the demolition clause in LKY's will."

In response, Mr Teo pointed out that the Government has the responsibility to consider the public interest aspects of any property with heritage and historical significance, and this applies to 38 Oxley Road.

"Many critical decisions on the future of Singapore were made there by Mr Lee and our pioneer leaders. The Committee has thus been looking at the options available for 38, Oxley Road while paying particular attention to respecting Mr Lee Kuan Yew's wishes for his house," said Mr Teo, who is also Coordinating Minister for National Security.

He added that the Government has already stated on several occasions that it will not do anything to affect Dr Lee's right to continue living at 38, Oxley Road for as long as she wishes.

On why a ministerial committee was established when no immediate decision has to be made on the house, Mr Teo said: "Due process is needed to consider the various options before making any decision on the house. This can take some time."

He added that he had considered several other factors.

First, if Dr Lee chooses to move out of the house in the near future, a decision on what to do about the house might have to be taken at that point, he said.

Second, soon after their father's death, Mr Lee Hsien Yang and Dr Lee had, as executors of the late Mr Lee's will, wanted the Government to commit itself immediately to demolish the house, though Dr Lee might continue to live in the house for many more years, Mr Teo noted.

Third, he said some members of Cabinet - including himself - felt it would be useful if a future Government deciding on the house had a set of options that came from ministers who had personally discussed this matter with Mr Lee Kuan Yew.

He said the ministerial committee wrote to all the siblings to ask for their views, to get a clearer sense of Mr Lee's thinking on the house.

The committee asked for further clarifications when siblings provided differing accounts of their father's wishes, he added.

"The committee's interest in Mr Lee's will is confined to the light that it sheds on his wishes for the house," Mr Teo said.

The committee has tasked relevant agencies to study a range of options for the house, and Mr Teo said he has shared these with the siblings.

Mr Teo said he personally would not support preserving the House as it is for visitors to enter and see, as that would be totally against the wishes of the late Mr and Mrs Lee Kuan Yew.

But he would not want to see the other extreme of having the house demolished and the property put on the market for new private residences either.

He added: "The Committee has also been studying various intermediate options such as demolishing the House but keeping the basement dining room where many important historical meetings took place, with an appropriate heritage centre attached. These studies are ongoing."